Book of condolences opened in memory of the late Habeeba Hussain 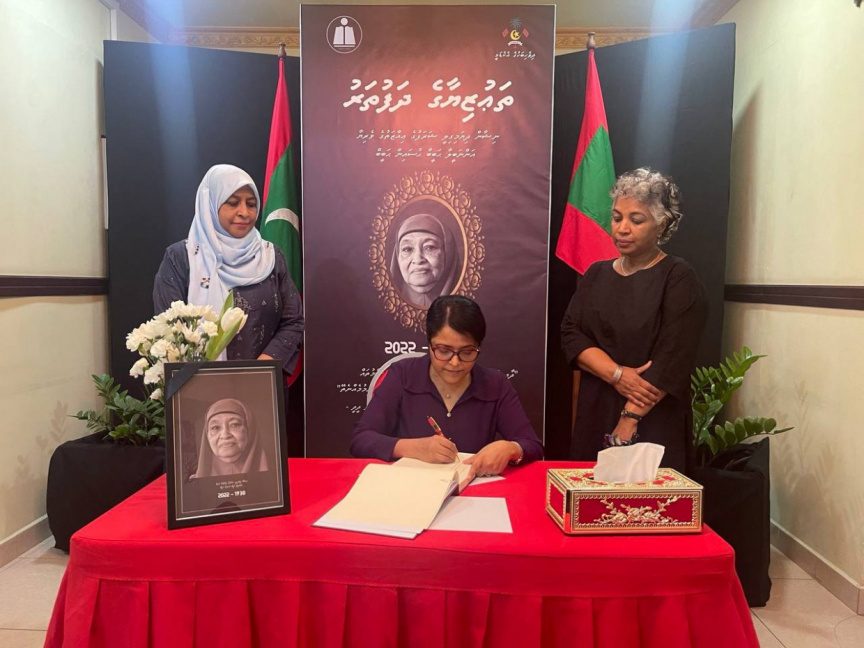 Minister of Arts, Culture and Heritage Yumna Maumoon signs the book of condolences opened in the memory of the late Habeeba Hussain Haeeb on November 28, 2022. (Photo/Dhivehi Language Academy)

A book of condolences has been opened on Monday in the memory of renowned writer, the late Habeeba Hussain Haeeb; who was a longtime server of Dhivehi language and literature, as well as a recipient of the Order of the Dignified Rule of Dhiyamigili Dynasty conferred by the president.

Habeeba passed away at the age of 92 at ADK Hospital last Monday evening, after a long illness.

At a special ceremony held at Dhivehi Language Academy this morning – the book of condolences was first signed by Minister of Arts, Culture and Heritage Yumna Maumoon.

The ceremony was attended by senior officials from Dhivehi Language Academy, National Library, Heritage Ministry and family members of Habeeba.

The book of condolences is opened for the public, to write their messages, on all working days of the next two weeks, from 9:00am to 14:00pm and Dhivehi Language Academy.

Habeeba completed her education at India’s Usmaniyya High School in Urdu medium, and then in English medium from Sri Lanka.

She began her career at Madhrasathul Saniyya as the "Mu’avina." She continued to serve as a teacher and special teacher at the school before joining the Ministry of External Affairs as a secretary. She also served as the secretary of the department for the World Health Organization.

During her 50 years of service to the government – she spent 29 years of them at the National Library, where she held various posts. Starting out as the library’s very first librarian on December 12, 1978, she later managed the establishment from 1981 till her resignation in 2018.

She also served as a member of the parliament appointed by the President.

Apart from this, Habeeba served as a member of the History Committee and Advisory Committee of the Maldives Center for Historical and Linguistic Research. In addition to her contributions to the book titled "Qarunu," she also hosted a radio program on history and culture for students.

In 1955, she took an interest in history, and worked as a history teacher at Majeediyya School and Aminiya School.

Habeeba has written a number of stories. She also translated numerous books in Urdu and English into Dhivehi

In 2007, Habeeba was presented with the National Award of Honour in Dhivehi literature. She also received a special recognition award in 1981 for her contributions to the field of translation.

She is also a recipient of the "Minivan 25" award and the "Noosverikamuge Ran Galan." Habeeba was conferred the Order of the Dignified Rule of Dhiyamigili Dynasty in 2011.