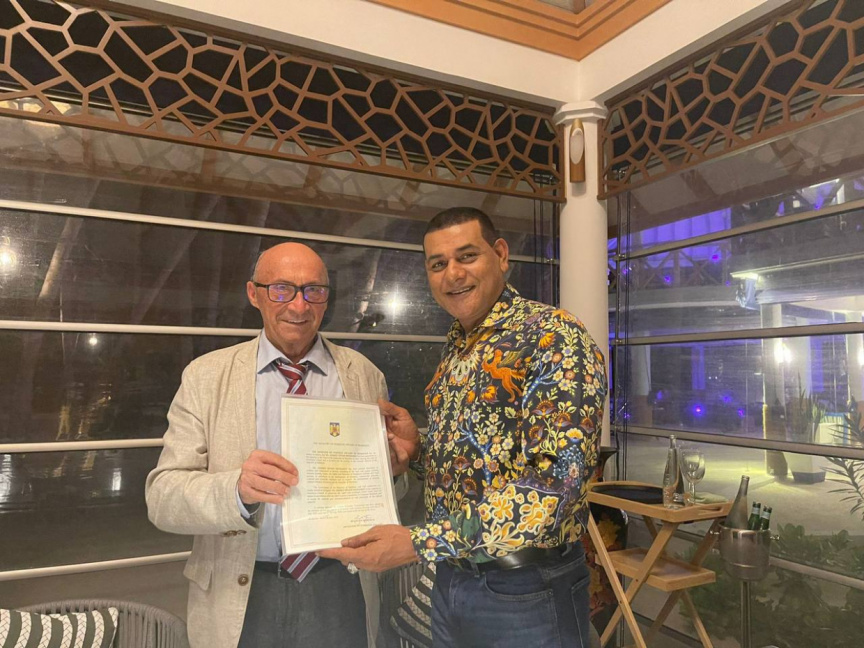 President of Maldives Development Alliance (MDA), Meedhoo MP Ahmed Siyam Mohamed presented credentials as the ‘Honorary Consul of Romania’ in the consulate of Romania to the Maldives.

President of Maldives Development Alliance (MDA) and the parliamentary representative for Meedhoo constituency Ahmed Siyam Mohamed was presented his letter of credentials has the ‘Honorary Consul of Romania’ in the consulate of Romania to the Maldives.

The letter of credentials was presented to MP Siyam during a special ceremony held at Olhuveli Resort in Male’ atoll operation by Sun Siyam Group – by Chargé d'affaires of the Romanian Embassy in Sri Lanka Victor Chiujdea.

MP SIyam’s appointment to the post was first announced by Romanian Embassy in Sri Lanka.

In a statement released on October – the Embassy requested the support of Maldivian authorities to MP Siyam in fulfilling his prerogatives as Honorary Consul of Romania in the Republic of Maldives, Head of Consulate of Romania in Male’.

The appointment was also announced in a separate statement by Romania’s Foreign Minister Bodgan Aurescu – which stated that MP Siyam had been granted directions of activity and competence to protect, according to the laws and usages existing between friendly states, the rights and interests of Romanian citizens and legal persons, to contribute to the development of economic, commercial, touristic, cultural and scientific relations and to support the development of friendly relations between Romania and Maldives.

Minister Aurescu also requested Maldivian authorities to recognize MP Siyam in his capacity as Honorary Consul of Romania to the Maldives.

Diplomatic relations were established between Maldives and Romania in 1979.