Minister: AVSECOM’s biggest challenge – having to operate under civil service 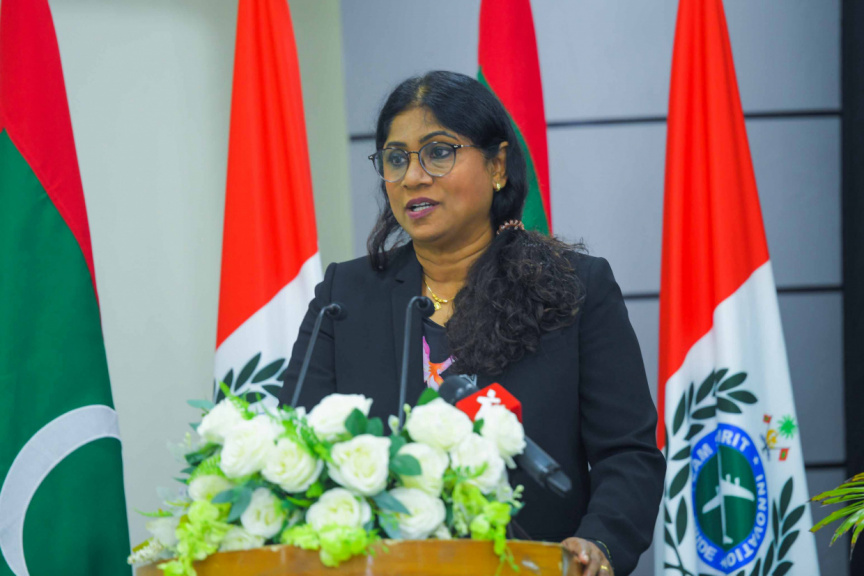 The biggest challenge in operating the Aviation Security Command (AVSECOM) is that of having to operate a security service as part of civil service, states Defense Minister Mariya Ahmed Didi.

Mariya made the comment during the ceremony held Saturday morning to grant promotions to 58 AVSECOM officers.

Speaking at the ceremony, Mariya said civil service regulations for annual and sick leave makes it difficult to shape work.

“There are certain challenges because of civil service arrangements for annual and sick leave, such as male officers having to body search female passengers,” she said.

Mariya highlighted on the efforts made to develop AVSECOM, which operates under the Defense Ministry.

Mariya said that vehicles have been provided to all airports to patrol and maintain security in controlled areas.

Over 50 employees have been trained abroad and given the chance to observe aviation security in foreign countries during the four years of President Ibrahim Mohamed Solih’s administration, she said.

Mariya said that close to 2,000 employees have been given various trainings in Maldives.

This shows how much the government prioritizes security services, she said.

Mariya also spoke about the freeze on promotions at AVSECOM.

“As many of you are aware, there was a freeze on promotions for Aviation Security Command’s employees between 2013 and 2018. This service faced various challenges as a result. Some senior employees lost their seniority. It adversely affected the morale and motivation of employees,” she said.

She said that employee appraisals must be fair and free from personal bias.

People should be promoted based on merit, she said.