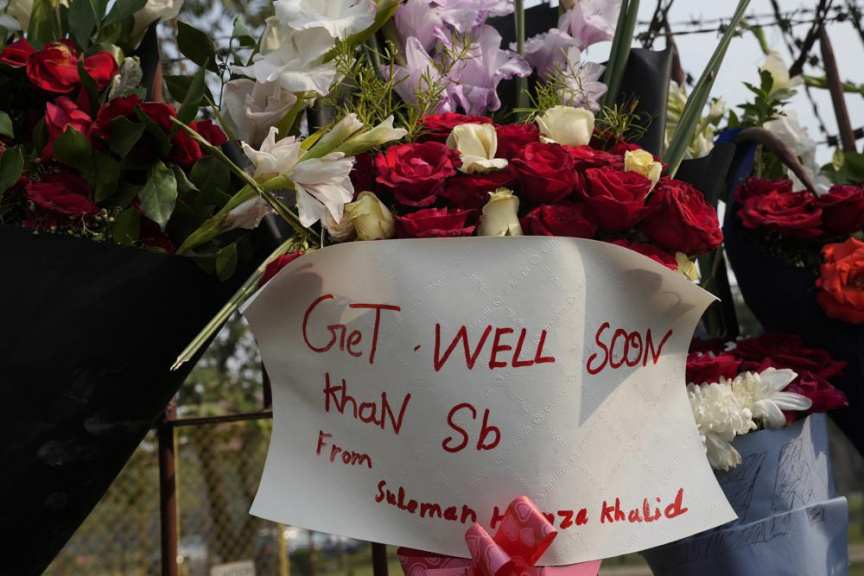 A bouquet with a "get well soon" message is placed by well-wisher over the wall of a hospital where former Pakistani Prime Minister Imran Khan is being treated for a gunshot wound in Lahore, Pakistan, Friday, Nov. 4, 2022. (AP Photo/K.M. Chaudhry)

ISLAMABAD (AP) — Pakistan’s former Prime Minister Imran Khan is in a stable condition after being shot and wounded during a protest march, a senior leader from his party said Friday.

Khan’s protest march and rallies were peaceful until Thursday afternoon’s attack, raising concerns about growing political instability in Pakistan, a country with a history of political violence and assassinations.

One of Khan’s supporters was killed and 13 others, including two lawmakers, were wounded in the attack.

“There is no doubt about it,” said Fawad Chaudhry, a senior leader from Khan’s Tehreek-e-Insaf party. “We are convinced that it was a well-planned assassination attempt on Pakistan’s most popular leader Imran Khan, who is now in stable condition at the Shaukat Khanum hospital in Lahore after undergoing surgery there.”

He said the party leadership was meeting in Lahore later Friday. “We will announce today exactly when our march will resume from Wazirabad,” Chaudhry told The Associated Press. He provided no further details, but Khan’s party in a brief statement urged supporters to hold nationwide rallies to condemn the shooting.

Asad Umar, a senior figure from Khan’s party, blamed the shooting on Prime Minister Shahbaz Sharif, the country’s interior minister, and an army general without offering any evidence.

The government called the allegation baseless, saying it has ordered a high-level probe and that the attacker is being questioned.

Police are still questioning the alleged attacker, who is shown in a video saying he carried out the shooting and acted alone.

Defense Minister Khawaja Mohammad Asif on Friday said the Punjab government suspended the police officials who released the video to the media.

The attack took place as the former cricket star-turned-politician was traveling in a large protest convoy of trucks and cars toward Islamabad. Video footage shows him and his team ducking for cover on top of a vehicle as gunfire rings out.

Interior Minister Rana Sanaullah Khan said some political elements from Khan’s party were trying to create chaos in the country following the attack.

His comments came after scores of Khan’s supporters demonstrated in various parts of the country, with some chanting slogans against the military and vowing to avenge the attack. The interior minister called the alleged gunman a “religious extremist” who had accused the ex-premier of comparing himself to prophets in some of his recent public speeches.

Khan, 70, is likely to be allowed to go home soon, according to Faisal Sultan, who is heading the team of doctors who treated Khan. He told reporters Thursday that Khan’s surgery continued for two hours, and he had a bullet wound in his right leg.

He maintains that his April ouster from Parliament was unlawful and a conspiracy by his political opponents orchestrated by the United States, a charge denied by both Washington and Sharif.

Khan wants the government to announce snap elections. He led the protest from Lahore last Friday along with thousands of supporters, saying his protest will continue until his demands are accepted. Pakistan says elections will take place as scheduled in 2023.

His supporters rallied overnight in different parts of the country after the shooting.