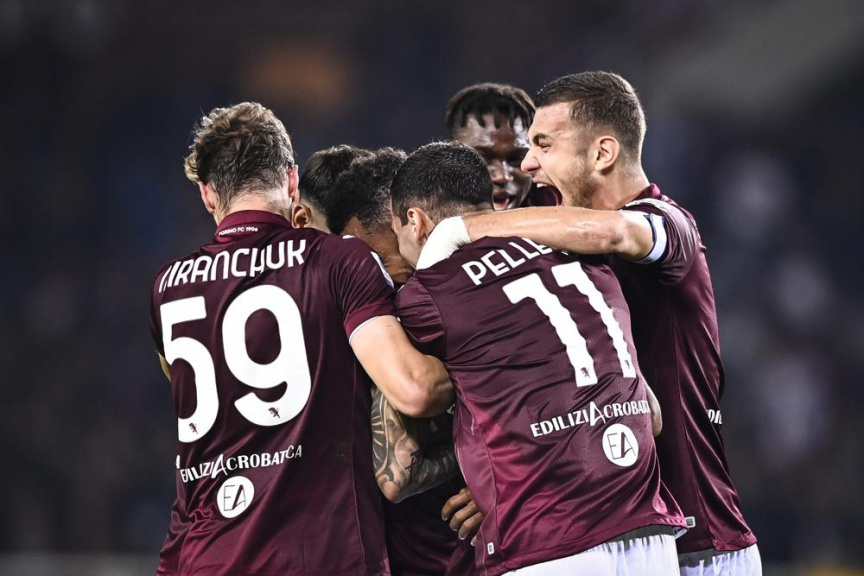 Torino's player celebrate after scoring during the Serie A soccer match between Torino and AC Milan at the Turin Olympic stadium, Italy, Sunday, Oct. 30, 2022. (Fabio Ferrari/LaPresse via AP)

MILAN (AP) — Defending champion AC Milan fell to a surprise second loss of the season in Serie A with a 2-1 defeat at Torino on Sunday.

Koffi Djidji and Aleksei Miranchuk netted in two first-half minutes for the hosts before Junior Messias pulled one back for Milan in the 67th following a bad mistake by Torino goalkeeper Vanja Milinković-Savić.

Milan is third in the standings after Atalanta leapfrogged it earlier in the day with a 2-0 win at Empoli. League leader Napoli is five points ahead of Atalanta and six points ahead of Milan after it beat Sassuolo 4-0 on Saturday.

Milan’s only other league defeat was at home to Napoli on Sept. 18. It also hadn’t lost a Serie A away match in more than a year.

The Rossoneri host Salzburg in the Champions League on Wednesday, needing a point to advance to the round of 16.

“We’re disappointed because we lost precious points,” Milan coach Stefano Pioli said. “Tonight’s match was important to stay second and not get too far from Napoli, which is having an exceptional campaign.

“We have to put this bad defeat behind us and focus immediately on Wednesday’s match … I’m expecting an aggressive Salzburg side, but with a different mentality and playing style to Torino.”

It was Torino’s second straight upset after it also surprisingly beat Udinese last week to end a run of five matches without a win.

Rafael Leão had scored in his two previous matches but missed a couple of easy opportunities early on and Torino took a surprise lead in the 35th when Djidji headed a free kick in off the right upright.

Matters swiftly went from bad to worse for Milan as a long goal kick was knocked down and Nikola Vlašić flicked it on for Miranchuk to fire across into the bottom right corner.

Milan was gifted a way back into the match in the second half when Milinković-Savić decided to come racing out of the penalty area but failed to get to the ball, and neither did teammate Alessandro Buongiorno. Messias lobbed the ball into an empty net.

The Torino players and bench were furious as they felt Messias had pushed over Buongiorno but the goal was given.

Atalanta managed to bounce back from its first defeat of the season — against Lazio last week — despite also seeing a penalty saved.

It took the lead against Empoli in the 32nd when Teun Koopmeiners pulled the ball back from the byline for Ademola Lookman. His shot was charged down but came to Hans Hateboer at the back post for an angled drive into the far bottom corner.

Empoli goalkeeper Guglielmo Vicario pulled off a number of saves with the most impressive coming when he managed to stop Koopmeiners’ penalty with his leg as he was diving to his right.

The penalty was given three minutes before halftime following a long check with the video assistant referee after Lookman’s free kick came off the elbow of Empoli forward Mattia Destro.

Atalanta did double its lead in the 59th with a stunning solo goal from Lookman, who controlled the ball on the left of the area, dribbled past three Empoli players until he found a gap and drilled a shot into the bottom left corner.

Atalanta’s Duván Zapata also had a goal ruled out for offside as did Empoli defender Tyronne Ebuehi late on.

Lazio conceded its first goals in Serie A in nearly two months as it surprisingly lost 3-1 at home to Salernitana.

Lazio had only let in five goals in its previous 11 Serie A matches and hadn’t conceded any in its past six in the league. It is above fifth-place Inter Milan on goal difference.

Salernitana is 10th after its first-ever win at the Stadio Olimpico.