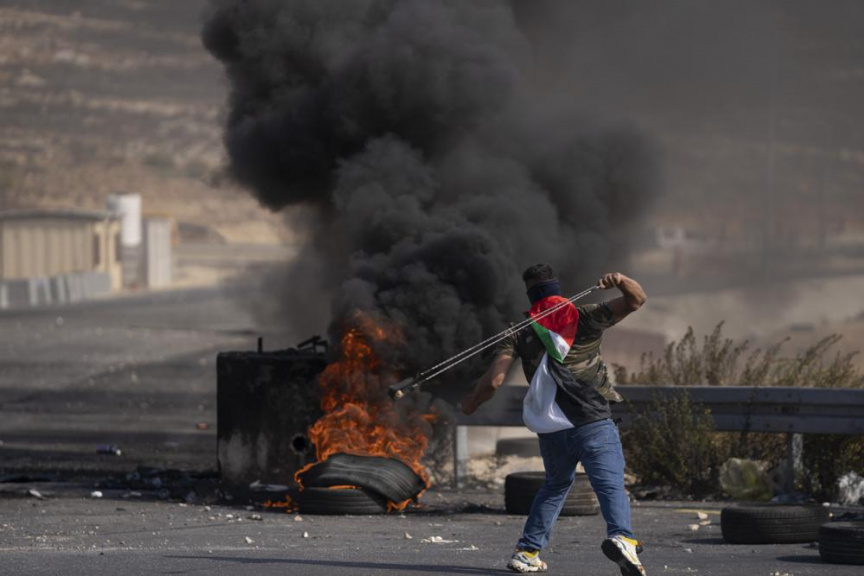 JERUSALEM (AP) — The Palestinian Health Ministry said early Friday that a Palestinian youth died shortly after being wounded by Israeli gunfire in the occupied West Bank as Israeli-Palestinian tensions surge.

The increase in tension is over Israeli raids and an uptick in shooting attacks by Palestinians.

The ministry said the 19-year-old suffered a mortal wound in the neck, while three others were wounded by live gunshots to their limbs. The violence happened as Israeli forces staged an arrest raid in the Jenin refugee camp, a spot in the northern West Bank that has been a flash point in recent fighting.

There was no immediate comment from the Israeli military.

Earlier, Jewish settlers stormed through a Palestinian town in the West Bank, the Israeli military said on Thursday, throwing stones at Palestinian cars and using pepper spray on troops who were trying to disperse the settlers.

The settler rampage late Wednesday comes days after a similar incident in the same area.

Also Thursday, Palestinian health officials said a 16-year-old Palestinian died after being wounded in clashes with Israeli troops late last month. Meanwhile, the Palestinians launched a general strike throughout the West Bank and east Jerusalem in response to the death of a suspected Palestinian attacker.

The rampage took place near Huwara, a Palestinian town in the northern West Bank near the city of Nablus, where a group of disaffected youth has taken up arms against Israel and in frustration with the Palestinian leadership’s close security ties to it.

Palestinian militants in the area have carried out several roadside shootings in recent weeks. The area is home to a number of hardline settlements, whose residents often intimidate Palestinians and vandalize their property.

Critics accuse Israel of turning a blind eye to settler violence against Palestinians and treating them with impunity, while being heavy-handed with Palestinian assailants or protesters. Settler violence has in the past also led to confrontations with soldiers which often sparks condemnations from politicians but rarely leads to a solution to the problem.

Police said the settlers fled the scene by car. They said a 20-year-old suspect was arrested and that more arrests were expected.

In a statement, the military’s chief of staff, Lt. Gen. Aviv Kohavi, condemned the violence.

“This is a very serious incident that embodies shameful and disgraceful criminal behavior that demands strict and swift justice,” he said. In a tweet, Israeli Prime Minister Yair Lapid called the settlers, “dangerous criminals.”

The violence comes as tensions between Israelis and Palestinians have surged in recent months.

More than 120 Palestinians have been killed in Israeli-Palestinian fighting in the West Bank and east Jerusalem this year, making 2022 the deadliest year since 2015.

The Palestinian Health Ministry said Mohammed Fadi Nuri, 16, was shot in the stomach last month by Israeli troops near the city of Ramallah and died Thursday.

The general strike Thursday targeted all sectors except for vital services like hospitals or bakeries.

Some schools were also closed. It was called to mourn the shooting death of Uday Tamimi, the alleged Palestinian gunman who killed an Israeli soldier earlier this month. Tamimi was the subject of a more than weeklong manhunt that culminated when he opened fire at a security guard at a West Bank settlement Wednesday.

The fighting has surged since a series of Palestinian attacks in the spring killed 19 people in Israel and more in recent violence. The Israeli military says most of the Palestinians killed have been militants. But stone-throwing youths protesting the incursions and others not involved in confrontations have also been killed.

Israel captured the West Bank in the 1967 Mideast war, along with east Jerusalem and the Gaza Strip, territories the Palestinian seek for their future state.

Israel to ‘strengthen’ settlements after attacks