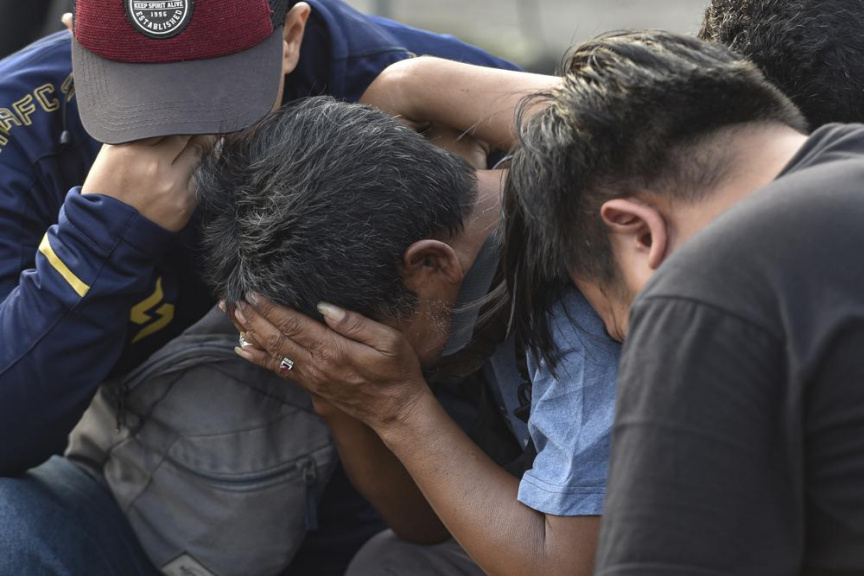 MALANG, Indonesia (AP) — Indonesia’s President Joko Widodo said on Wednesday that locked gates had contributed to the crush at the soccer stadium that left 131 dead and over 400 injured when police fired tear gas and set off a panicked run for the exits.

Widodo made the statement after touring the Kanjuruhan soccer stadium in East Java’s Malang city for a first-hand look at the scene of one of the world’s deadliest disasters at a sporting event. He also visited the victims recovering at Saiful Anwar General Hospital and pledged a thorough investigation into what had transpired on Saturday night.

Police continued to insist that the gates were open but were too narrow and could only accommodate two people at a time when hundreds were trying to escape.

Indonesia’s national soccer association said that because of a lack of workers, only a few people were ordered to open the gates, and they had not yet reached some doors when spectators began rushing to escape tear gas fired by police in an attempt to control fans who had entered the pitch.

Police acted after some of the 42,000 Arema FC fans ran onto the field in anger after their team was defeated 3-2, its first loss at home against visiting Persebaya Surabaya in 23 years.

“As an illustration, I saw the problem was there are locked doors, steep stairs and panic,” Widodo said in a news conference. “But all of this will be concluded later by an inquiry team.”

Widodo said that he spoke by phone with FIFA President Gianni Infantino on Monday to brief him on the investigation. They also discussed Indonesia’s preparations in hosting the 2023 FIFA U-20 World Cup.

Widodo said that Infantino ensured him that “FIFA is ready to help us to improve our football management.”

“I think we really need a total evaluation of our entire football management of the matches, stadiums, spectators, time and security,” he said. “So that this stadium disaster will never occur again.”

According to recommendations by FIFA and the Asian Football Confederation, exits at stadiums must be unlocked at all times during a game for safety purposes. Those rules don’t necessarily apply to domestic or national leagues but nevertheless are a safety standard, as is the recommendation against the use of tear gas as a crowd-control measure.

The deaths at the stadium included 17 children while 440 people were injured. At least 61 remained in the hospital as of Wednesday, 29 of them in critical condition.

Several institutions and the East Java provincial administration will give an additional compensation of between 10 million and 15 million rupiah ($650 and $1,000) to each of the victims’ families.

The Football Association of Indonesia has banned Arema from hosting any matches attended by its supporters in Malang until next year. The club’s chief executive, Abdul Harris, and the security coordinator, Suko Sutrisno, have been banned from participating in soccer for life because they had not secured the field and delayed the opening of the gates.

An Indonesian police chief and nine elite officers were removed from their posts Monday and 18 others were being investigated for responsibility in the firing of tear gas.