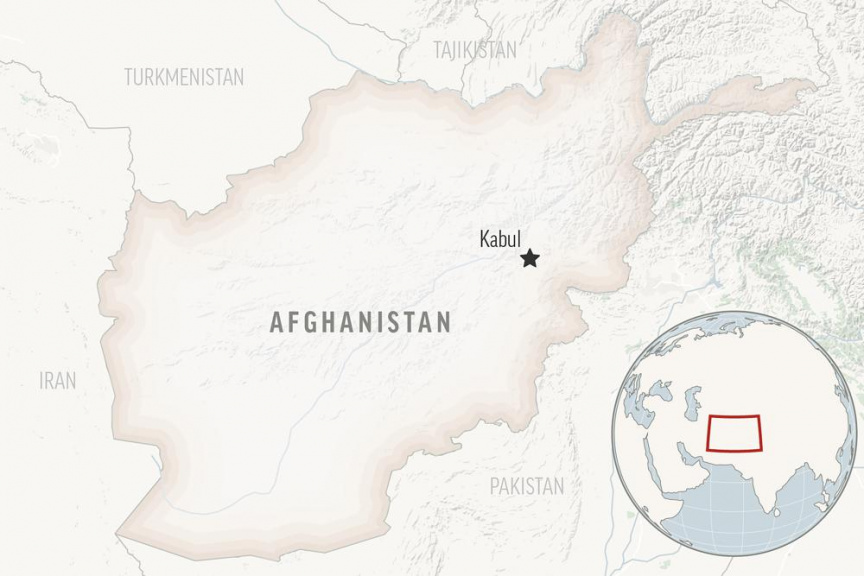 This is a locator map for Afghanistan with its capital, Kabul. (AP Photo)

KABUL, Afghanistan (AP) — A suicide bomber struck an education center in a Shiite area of the Afghan capital on Friday, killing 19 people and wounding 27, a Taliban-appointed spokesman for the Kabul police chief said.

The explosion inside the center in the Dashti Barchi neighborhood of Kabul — populated mostly by members of Afghanistan’s minority Shiite community — took place in the morning hours, said the spokesman, Khalid Zadran.

The victims included high school graduates, both girls and boys, who were taking a practice university entrance exam when the blast went off, Zadran said. The center is known as the Kaaj Higher Educational Center and helps students prepare and study for college entrance exams, among its activities.

Zadran said education centers in the area will need to ask the Taliban for additional security when they host events with big gatherings, such as the study prep on Friday.

One eyewitness, 19-year-old high school student Shafi Akbary, had been attending the center for the past six months. The center had invited students to come at around 6:30 a.m. on Friday for the practice exam, and Akbary said around 300 students were present.

“First, we heard the sounds of a few gunshots at the main gate. Everyone was worried and tried to run to a different direction. Soon after that, a huge explosion occurred inside the center,” said Akbary, speaking to The Associated Press over the phone.

Akbary, who was unharmed in the explosion, said he saw dozens of bodies and wounded people scattered around him. “I was so afraid and couldn’t even move myself to help them. Later, other people ran inside and took us out,” he added.

The suicide bombing was the latest in a steady stream of violence since the Taliban seized power. No one immediately claimed responsibility for the attack

The Islamic State group — the chief rival of the Taliban since their takeover of Afghanistan in August 2021 — has in the past targeted the Hazara community, including in Dashti Barchi.

“Our teams have dispatched at the site of the blast to find out more details,” Abdul Nafi Takor, a Taliban-appointed spokesman for the Interior Ministry, said earlier.

The U.S. chargé d’affaires for Afghanistan, Karen Decker, condemned the attack in a tweet.

“Targeting a room full of students taking exams is shameful; all students should be able to pursue an education in peace & without fear,” she said. “We hope for a swift recovery for the victims & we grieve with the families of the deceased.”

Afghanistan’s Hazaras, who are mostly Shiite Muslims, have been the target of a brutal campaign of violence for the past several years, blamed on the regional affiliate of the Islamic State group. Militants have carried out several deadly attacks in Dashti Barchi, including a horrific 2020 attack on a maternity hospital that killed 24 people, including newborn babies and mothers.

The United Nations children’s fund said it was appalled by Friday’s horrific attack, adding that violence in or around educational establishments was never acceptable.

“This heinous act claimed the lives of dozens of adolescent girls and boys and severely injured many more,” UNICEF tweeted. “Children and adolescents are not, and must never be, the target of violence."