MDA President Siyam: Education of no use if lacking discipline 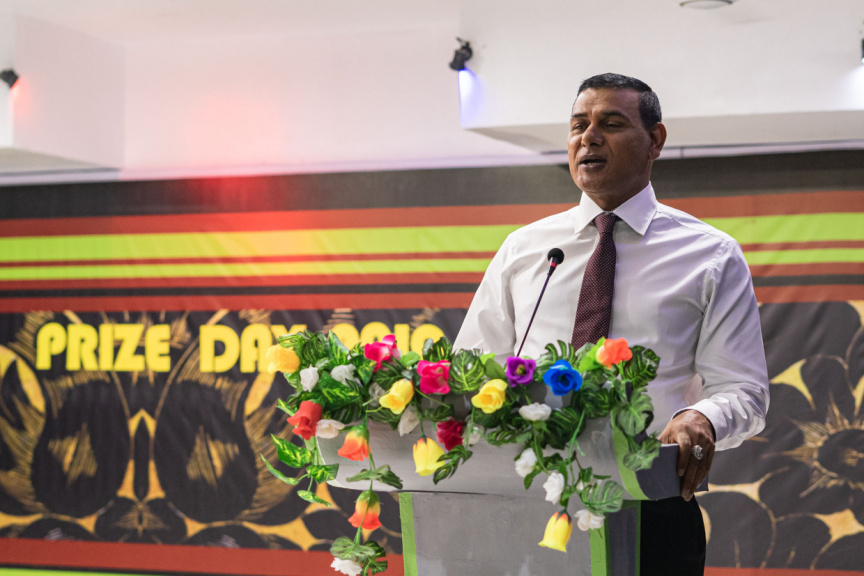 President of Maldives Development Alliance (MDA) and Parliamentarian MP Ahmed Siyam Mohamed said that no matter how much education one attains, it is of no use if lacking discipline.

Speaking at the ceremony held for Dh. Bandidhoo School’s Prize Day, Siyam expressed his gratitude to the students who achieved prizes.

Moreover, he boosted the morale of the students who did not win this time and advised them not to give up.

Based on his own experience, he also said that with hard work, anything can be achieved.

“With God’s will, anything I tried to achieve, I have. The biggest reason behind that success is hard work.”

Speaking in this regard, he said that after working hard, the rest is on continued prayers. He advised the students to work in that manner.

“Education is what is learned from school. For students’ brains to develop. Education is needed. Our most important thing [however] is discipline.”

Siyam went on to state that no matter how much education one attains, it is of no use if the person lacks discipline. He added that education is simply 40 percent of life while discipline makes up the rest of the 60 percent.

“Hence, a person's education and discipline need to come together. The education gained would also shine and glimmer based on the person's discipline.”

In his speech, MP Siyam spoke of the significance of teachers, even in a world as developed as the one now.

“We need to properly use the internet and other facilities. We can only use it best if there are teachers who can teach and explain the best usage of them.”

He also noted that as humans, we are most forgetful. Hence, he said that what is gained by students as education should become the light of their parent’s eyes.

“Today we see children lacking discipline on the road. They act in different manners. Kids can be seen from the roads of Male’ City that even use dangerous types of drugs.”

However, he happily highlighted that the drug epidemic has not spread amongst the Bandidhoo community.

For this, he expressed gratitude to the people and council of the island, urging them all to continue the same efforts in order to prevent small children from being caught up in drug usage.