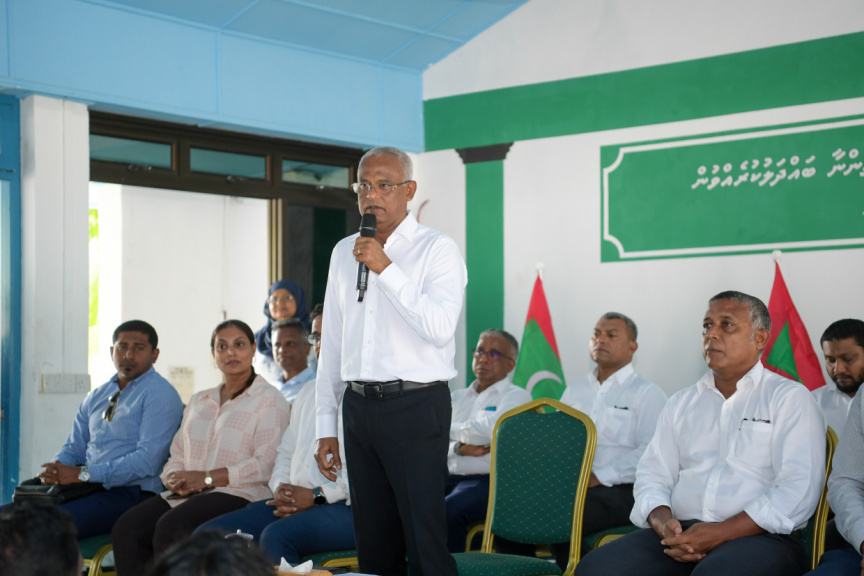 While meeting with the community during his visit, President Solih spoke of plans to alleviate the age-old grievances of the island.

He also revealed discussions about the most pertinent needs of the residents were held at his meeting with the members of the island council and Women’s Development Committee (WDC) earlier in the day.

President Solih announced the government's plans to carry out coastal protection works to address the island’s beach erosion problem in conjunction with the harbor development project. Raiymadhoo is the only island in the Meemu Atoll which lacks a proper harbor.

The President revealed that the sewerage network project initiated by his administration is expected to be completed in December, followed by the water supply project in March 2023. The development of a futsal and volleyball court is also in different stages.

In addition to this, President Solih talked about improving healthcare services across the country. He noted the importance of ensuring reliable connectivity between the islands for such services.

Speaking in this regard, he stated that the "Raajje Transport Link" ferry service would help address numerous problems faced in the atoll.

This marks the first time President Solih visited Raiymandhoo. He had expressed gratitude for the warm welcome by the community.

A high-level government delegation, including cabinet members, accompanied the President on the visit. The cabinet minister briefed the community about the developmental plans for the island and answered their queries.

Maduvvari harbor project will go on with people's input