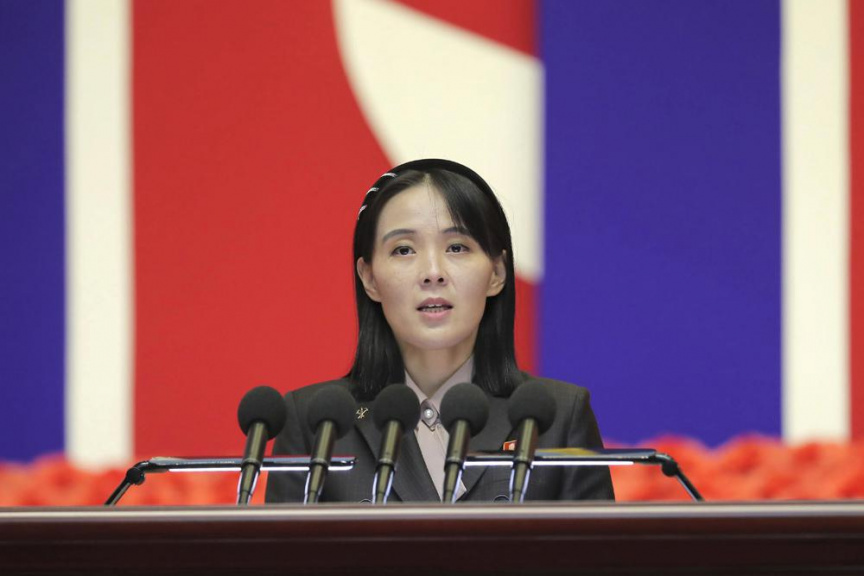 FILE - This photo provided on Aug. 14, 2022, by the North Korean government, Kim Yo Jong, sister of North Korean leader Kim Jong Un, delivers a speech during the national meeting against the coronavirus on Aug. 10, 2022. (Korean Central News Agency/Korea News Service via AP)

In a commentary published by state media Friday, Kim Yo Jong stressed that her country has no intentions to give away its nuclear weapons and ballistic missiles program for economic cooperation, saying “no one barters its destiny for corn cake.”

She questioned the sincerity of South Korea’s calls for improved bilateral relations while it continues its combined military exercises with the United States and fails to stop civilian activists from flying anti-Pyongyang propaganda leaflets and other “dirty waste” across their border.

She also ridiculed South Korea’s military capabilities, saying the South misread the launch site of the North’s latest missile tests on Wednesday, hours before Yoon used a news conference to urge Pyongyang to return to diplomacy.

“It would have been more favorable for his image to shut his mouth, rather than talking nonsense as he had nothing better to say,” she said about Yoon.

“This attitude from North Korea will not only threaten peace on the Korean Peninsula but result in further difficulties for the North by worsening its international isolation and economic situation,” Lee Hyo-jung, a Unification Ministry spokesperson, said during a briefing.

Kim Yo Jong last week had threatened “deadly” retaliation against the South over the COVID-19 outbreak in the North, which it dubiously claims was caused by leaflets and other objects dropped from balloons launched by southern activists.

Yoon during a nationally televised speech on Monday proposed an “audacious” economic assistance package to North Korea if it takes steps to abandon its nuclear weapons and ballistic missiles program. The offers of large-scale aid in food and health care and modernizing electricity generation systems and seaports and airports weren’t meaningfully different from previous South Korean proposals rejected by the North, which is speeding the development of an arsenal Kim Jong Un sees as his strongest guarantee of survival.

Kim Yo Jong, one of the most powerful officials in her brother’s government who oversees inter-Korean affairs, said Yoon displayed the “height of absurdity” with his offer, saying it was realistic as creating “mulberry fields in the dark blue ocean.”

She said South Korea’s words and actions would only incite “surging hatred and wrath” from North Koreans and insisted Pyongyang has no immediate plans to revive long-stalled diplomacy with Seoul. “It is our earnest desire to live without awareness of each other,” she said.

Inter-Korean ties have worsened amid a stalemate in larger nuclear negotiations between North Korea and the U.S. that derailed in 2019 because of disagreements over a relaxation of crippling U.S.-led sanctions on the North in exchange for disarmament steps.

There are concerns that Kim Yo Jong’s threats last week over the leafletting portends a provocation, of which the possibilities may include a nuclear or missile test or even border skirmishes. The United States and South Korea kick off their biggest combined training in years next week to counter the North Korean threat. The North describes such drills as invasion rehearsals and has often responded to them with missile tests or other provocations.

During Wednesday’s news conference, Yoon expressed hope for meaningful dialogue with the North over his aid-for-disarmament proposal. Maintaining a reserved tone, Yoon said his government has no plans to pursue its own nuclear deterrent and doesn’t desire political change in Pyongyang that’s brought by force.

Yoon spoke hours after South Korea’s military detected North Korea firing two suspected cruise missiles toward the sea and identified the western coastal site of Onchon as the launch location. Kim Yo Jong in her column said the weapons were fired from a bridge in the city of Anju, north of Onchon and farther inland, and ridiculed South Korean and U.S. capacities to monitor North Korean missile activity. The South’s military has yet to release its analyzed flight details of those missiles.

“If the data and flight trajectory (of the missiles) are known, (the South) will be so bewildered and afraid,” Kim Yo Jong said. “It will be a thing worthy of seeing how they will explain about it before their people.”

The latest launches extended a record pace in North Korean missile testing in 2022, which has involved more than 30 ballistic launches, including the country’s first demonstrations of intercontinental ballistic missiles in nearly five years.

North Korea’s heighted testing activity underscores its dual intent to advance its arsenal and force the United States to accept the idea of the North as a nuclear power so it can negotiate economic and security concessions from a position of strength, experts say.

Kim Jong Un could up the ante soon as there are indications that the North is preparing to conduct its first nuclear test since September 2017, when it claimed to have developed a thermonuclear weapon to fit on its ICBMs.

NKorea test-fires ICBM with range to strike entire US

Lanka hope to reach initial agreement with IMF for help