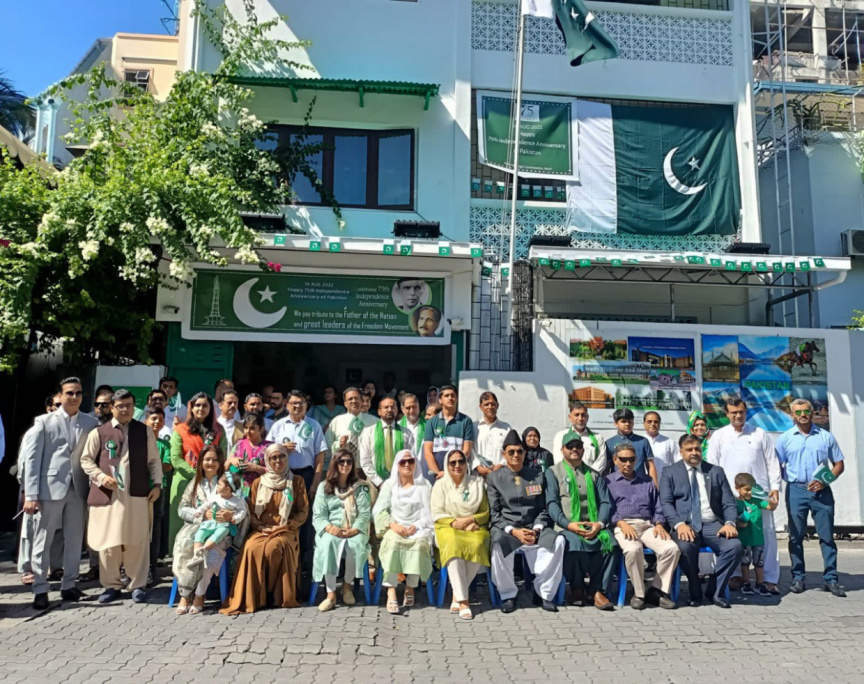 The ceremony began with the recitation of Holy Quran.

The Pakistan flag was hoisted to the country’s national anthem by High Commissioner Mukhtar.

Welcoming the attendees, Deputy High Commissioner Zulqurnain expressed his appreciation to the participation and national spirit of the guests.

He extended heartfelt felicitations to Pakistanis residing in the Maldives and across the world on the jubilant occasion of Pakistan’s Independence Day.

He highlighted the importance of independence, and paid tribute to the founder of Pakistan Quaid-e-Azam Muhammad Ali Jinnah and the leaders of the Pakistan Movement.

“Their visionary struggle and sacrifices blessed us a separate ideological state - Pakistan.

He also noted the services of Pakistanis in Maldives and wished the Maldivian people continued progress and development.

Addressing the gathering, High Commissioner Mukhtar said Independence Day was an occasion to pay tribute to people who sacrificed their lives defending and protecting territorial as well as ideological frontiers of Pakistan.

He said that as Pakistan celebrated its Independence Day, the Pakistani people grieved for the suffering of Kashmiris.

“We stand firmly behind our Kashmiri brethren in their struggle for their right to self-determination,” he said.

He urged the international community to raise their voice against the suffering of Kashmiris.

High Commissioner Mukhtar stressed the need for Pakistanis to stand firm and work for progress and prosperity of the country.

He reiterated the pledge to remain steadfast and embrace every challenge by holding the torch of "Unity. Faith and Discipline", as said by the founder of Pakistan.

He reaffirmed Pakistan’s commitment to work with Maldives to enhance bilateral ties in all fields.

The ceremony ended with national songs by children, prayers for the progress and prosperity of Pakistan and for the end of the suffering of Kashmiris and Palestinians, and the cutting of a cake.

Adeeb, Ziyath’s statements to be taken on same day