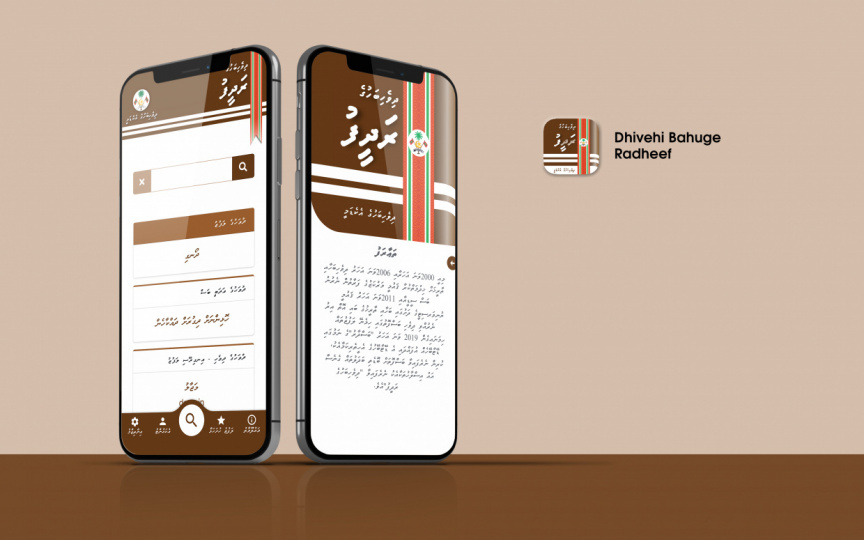 Dhivehi Bahuge Radheef, the official Dhivehi language dictionary application, has been launched to iPad and tablet in a bid to expand access.

The app, developed by the Dhivehi Bahuge Academy, was launched to android and IOS phones on May 10. The app is available for download on Google Play Store and Apple Store.

The app was launched to iPad and tablet on Thursday, during the award gala for the national oratory competition.

Dhivehi Bahuge Academy’s president Dr. Ashraf Abdul Raheem told Sun the number of people who use Dhivehi Bahuge Radheef had expanded since it was launched in May. He said the app was introduced to iPad and tablet to further improve accessibility.

Noting that thousands of school students use tablets, Ashraf said the Dhivehi Bahuge Academy believed it a must that the app be available on tablets.

“The number of people who use the app has increased. Many school students have government-issued tablets. Having Dhivehi Bahuge Radheef on it will further aid them,” he said.

The Dhivehi Bahuge Radheef was designed with focus on promoting Maldivian culture and improving user convenience and knowledge.

The highest number of searches were for the Dhivehi-English word of the day.

The most searched word is “Manthelaa”, a word for reef.

All users have the opportunity to submit commonly used words that aren’t on the Dhivehi Bahuge Radheef.

“We are looking to improve and expand features for a greater impact. For example, there might be some meanings that might be missing from the Radheef that need to be included. The opportunity is now available via the app,” he said.

Ashraf said users have submitted 295 new words, some of them legitimate, and some submitted as a joke.

Ashraf said the Dhivehi Bahuge Academy welcomed all submissions, but wished to advise users to make use of the opportunity responsibly.

He said the Dhivehi Bahuge Academy, as part of their work to improve the app, planned on introducing a feature which will allow users to track the submissions they make.

“Its important for people who submit words to know what happens after they make the submission. The user must know whether the word was approved or not on the app itself. We are working on it. The change will come to affect soon, In Sha Allah,” he said.

A database has been set up to monitor statistics from the app, called Basdhaaru.

Ashraf encouraged people to make good use of the app.