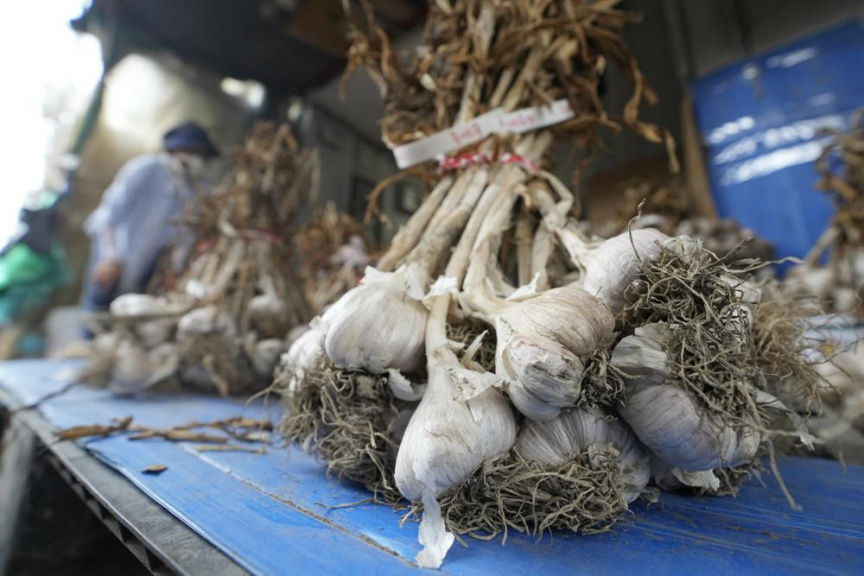 Bulbs of garlic are displayed at a shop in a traditional market in Seoul, South Korea, Wednesday, Aug. 3, 2022. (AP Photo/Ahn Young-joon)

SEOUL, South Korea (AP) — A rural South Korean town is getting roasted over its video ad on garlic that some farmers say stinks of obscenity and has even sexually objectified the agricultural product.

The controversy surrounds a 30-second video which had been on a YouTube channel for Hongseong County, a small central and western South Korean town of about 100,000 people known for its local “Hongsan” garlic, for about two years.

The video shows a woman touching the thigh of a man named “Hongsan” with a full garlic head mask and saying words like “very thick” and “hard” to apparently metaphorically advertise the quality of the local garlic. The scene is a parody of a famous scene from a 2004 hit Korean movie titled “Once Upon a Time in High School.”

The spicy ad, which reportedly generated about 190,000 views on Hongseong’s YouTube channel, had been largely kept underground, but began to take root in the larger public when it was aired on electronic billboards at a Seoul express bus terminal and a downtown street in the central city of Daejeon last month ahead of the garlic’s release.

One farmer who saw the video notified some farmers’ groups, while South Korean media also began reporting about it, leaving a bad taste in people’s mouths.

“We can’t repress our astonishment,” said a joint statement issued by the local branches of two major farmers’ organizations — the Korean Peasants League and the Korean Women Peasants Association. “The video offended the people who watched it and dealt a big blow to the image of the agricultural product that farmers have laboriously grown.”

Calling the video “suggestive” and “inappropriate,” the statement said it “sexually objectified” garlic.

Hongseong officials said Wednesday they’ve withdrawn the video from their YouTube channel and had stopped airing it on the billboards last week. The county hasn’t issued any official statement on the issue, and officials said they are discussing how to respond to the farmers’ requests.

County officials said they formally changed the name of their local garlic to “Hongseong” after their county name in January.

Woman arrested in S.Korea after bodies found in NZ