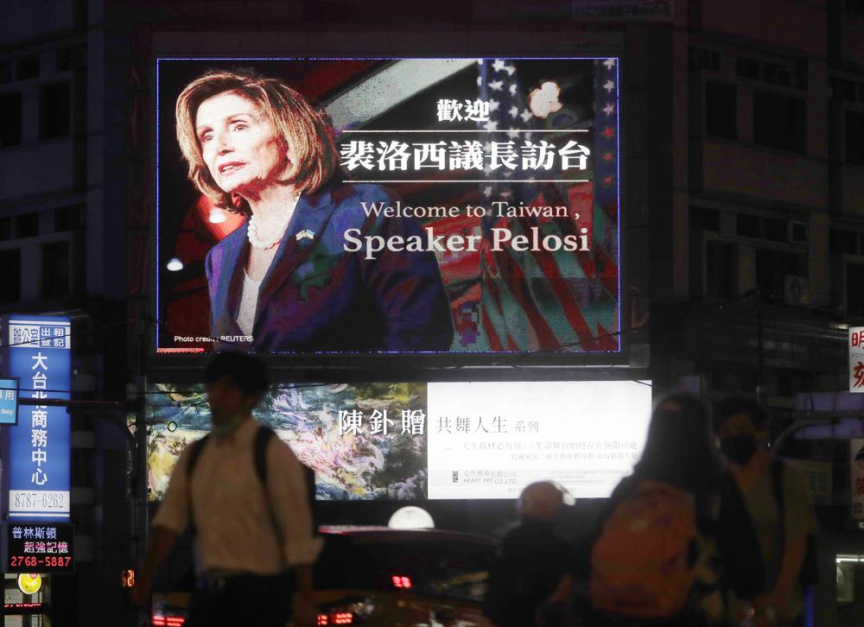 The Chinese Foreign Ministry, on Tuesday, has stated that Speaker of the United States (US) House of Representative Nancy Pelosi’s visit to Taiwan despite China’s strong opposition and serious representations has a severe impact on the political foundation of China-US.

House Speaker Pelosi flew to Taiwan on a US Airforce passenger jet on Tuesday – becoming the highest-ranking American official to visit the island in 25 years.

In a statement released following her arrival at Taiwan – Chinese Foreign Ministry said that her visit is a serious violation of the one-China principle and the provisions of the three China-US joint communiqués. They went onto state that Pelosi’s visit severely impacts the political foundation of China-US relations and seriously infringes upon China’s sovereignty and territorial integrity.

“It gravely undermines peace and stability across the Taiwan Strait, and sends a seriously wrong signal to the separatist forces for ‘Taiwan independence’,” the Ministry added.

Through their statement, the Chinese Foreign Ministry reiterated that the one-China policy; the diplomatic acknowledgment of China's position that there is only one sovereign state under the name China and Taiwan is part of China, as opposed to the idea that there are two states.

“There is but one China in the world, Taiwan is an inalienable part of China’s territory, and the Government of the People’s Republic of China is the sole legal government representing the whole of China,” they had said.

Chinese Foreign Ministry said that the one-China policy has been clearly recognized by United Nations General Assembly Resolution 2758 of 1971.

In this regard, they noted that since People’s Republic of China was founded in 1949 – 181 countries have established diplomatic relations with China on the basis of the one-China principle.

“The one-China principle is a universal consensus of the international community and a basic norm in international relations,” they added.

Noting these countries includes the US – the Foreign Ministry pointed out that the country made a clear commitment in the China-U.S. Joint Communiqué on the Establishment of Diplomatic Relations in 1979; “The United States of America recognizes the Government of the People’s Republic of China as the sole legal Government of China. Within this context, the people of the United States will maintain cultural, commercial, and other unofficial relations with the people of Taiwan.”

Therewith, the Ministry said that congress, as part of the US government, is inherently obliged to strictly observe the one-China policy of the U.S. Government and refrain from having any official exchanges with Taiwan.

Citing these reasons – the Ministry urged US to take credible action to strictly observe the one-China principle and the provisions of the three China-U.S. joint communiqués.

“It (US) should stop supporting and conniving at “Taiwan independence” separatist forces in any form. It should stop its acts of saying one thing but doing the opposite on the Taiwan question. It should stop distorting, obscuring and hollowing out the one-China principle,” the Ministry’s statement read.

The US government has stated that the United States remain committed to the one-China policy. However, they claim the policy allows for informal relations and defense ties with Taiwan.

However, Pelosi in an opinion piece published by The Washington Post on her arrival to Taiwan said that the US and its allies “make clear” of not giving in to “autocrats”.

China imposes sanctions on US officials over Xinjiang