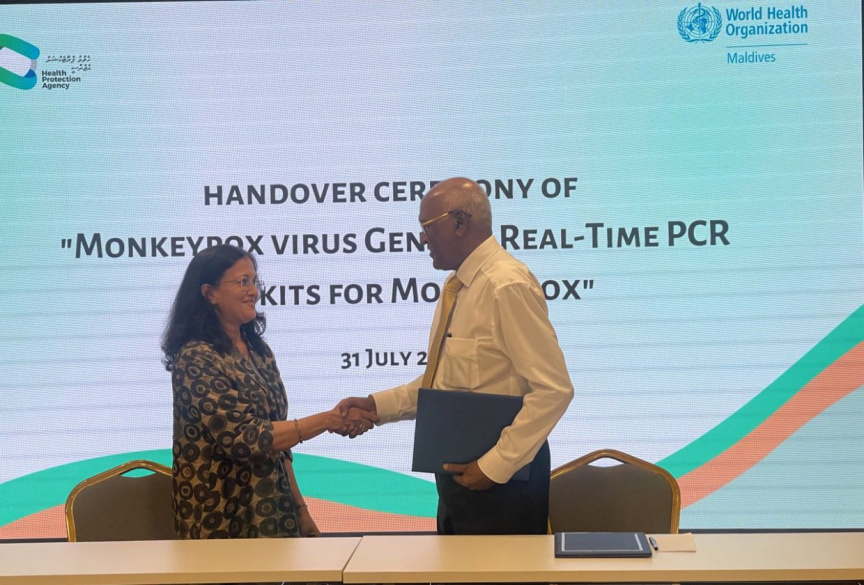 A capture from the ceremony held to handover 250 monkeypox PCR test kits donated to the Maldives by World Health Organization (WHO) on July 31, 2022. (Photo/Health Ministry)

World Health Organization (WHO), on Sunday, has donated 250 monkeypox PCR test kits to the Maldives.

The expanding monkeypox outbreak in more than 70 countries across the globe prompted the World Health Organization (WHO) to declare the disease a global emergency on July 23.

Announcing the donation of the test kits – Health Ministry said that authorities have been responding to suspected cases of monkeypox in the Maldives. They also confirmed that the nation has the capacity for case investigation, contact tracing, testing and risk communications.

Thanking WHO for their generous donation – the Ministry said that they were working alongside the organization to procure more kits. They noted that an additional shipment of testing kits is set to be received in the coming week.

Health Ministry also underscored that a monkeypox PCR training will be conducted for laboratory staff virtually on Monday, with WHO’s support. It was stressed by the Ministry that testing for monkeypox in the Maldives will commence immediately after the training.