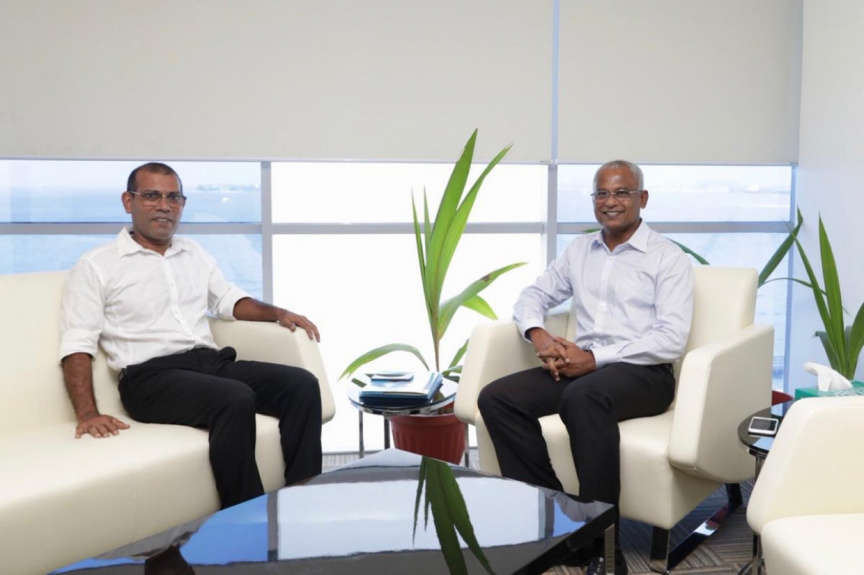 The President’s Office spokesperson has denied allegations made by Parliament speaker, former president Mohamed Nasheed, accusing President Ibrahim Mohamed Solih of having an extramarital affair with a young girl.

In MDP national council Whatsapp group on Friday, Nasheed shared a tweet which said a video of Kinbidhoo MP Mohamed Nashiz, husband of Addu Meedhoo MP Rozaina Adam, had been found on the phone of MD Almagiri, a Bangladeshi sex worker who recorded himself having sex with men, some of them high-profile individuals.

He asked whether it was true.

Nasheed’s younger brother Ahmed Nazim Abdul Sattar was arrested by police on Thursday after a video was leaked online which allegedly showed him having sex with Alamgiri.

Nasheed said he wished to asked President Solih why everyone else with compromising pictures taken were protected and Nazim alone was arrested.

He said that he had received four pictures which showed President Solih having sex with a young girl.

He questioned whether the police had the pictures and said that the girl appeared to be the daughter of a close family friend.

Nasheed asked whether he wished to see how baseless the allegations were.

“Faya, you have no business advising me,” he said.

Fayaz suggested that Nasheed share the pictures he may have with the police.

However, Nasheed has yet to file the case with the police.

In a tweet shortly after Nazim’s arrest, Nasheed said his brother’s arrest was selective and politically motivated to appease hardline extremists in the coalition government.

He also said the arrest was made in violation of criminal procedures.

However, police have denied the investigation into the case was influenced in any way.

According to the police, the arrests were made after forensic analysis of the many videos and images that leaked online in June.