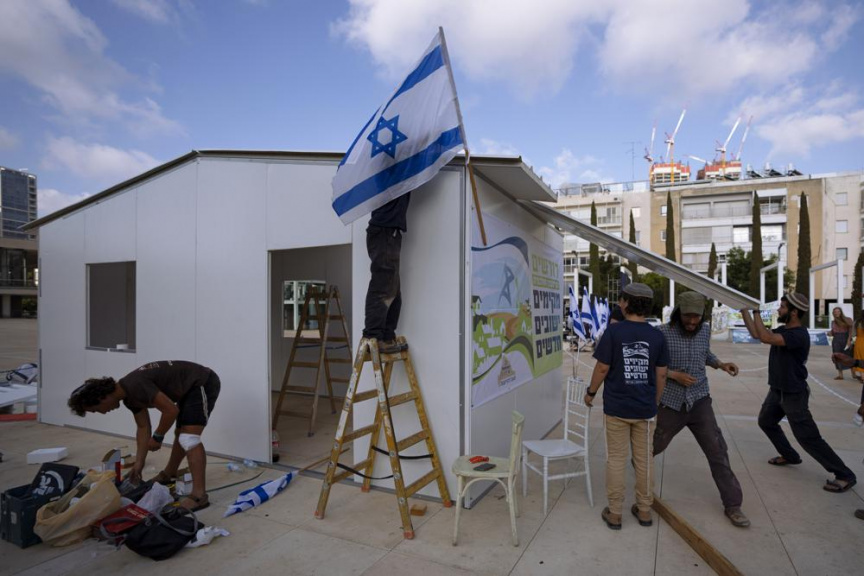 Right wing Israeli activists from the Nachala Settlement Movement erect a temporary structure as part of a protest calling for the establishment of new Jewish settlements in the occupied West Bank, at Habima Square in Tel Aviv, July 12, 2022. (AP Photo/Oded Balilty)

JERUSALEM (AP) — The Israeli Supreme Court has cleared the way for Jewish settlers of an outpost in the occupied West Bank to remain in their homes, overturning an earlier eviction order that determined the outpost had been built improperly on privately owned Palestinian land.

In their decision, a panel of judges found that though the Mitzpe Kramim outpost was built on privately owned Palestinian land, it had been allocated to the settlers in “good faith” by the Israeli government. Therefor, the 40 Jewish families living there remain, the judges said.

Palestinians and human rights groups fear this could set a precedent for future disputes over Jewish settlements built on privately owned Palestinian land.

Peace Now, an Israeli anti-settlement watchdog, called the ruling an “absurd decision.” According to the group, an estimated 150 unauthorized outposts dot the West Bank. Peace Now fears that Wednesday’s decision could open the floodgates for more similar rulings.

“These outposts in the future might be recognized by Israeli law,” said Mauricio Lapchik, a Peace Now spokesman. “This is the biggest danger.”

Israel captured the West Bank in the 1967 Mideast war and has built more than 130 authorized settlements there, many of which resemble small towns, with apartment blocks, shopping malls and industrial zones. The Palestinians want the West Bank to form the main part of their future state.

While Israel differentiates between recognized settlements and unauthorized outposts, the international community overwhelmingly views all settlements as illegal and obstacles to peace.

Israel refers to the West Bank by its biblical name, Judea and Samaria, and considers it the heartland of the Jewish people. It sees the West Bank as disputed territory and says its fate should be subject to negotiations. Israeli-Palestinian peace talks collapsed more than a decade ago.

In 2018, the Jerusalem District Court issued a decision legalizing Mitzpe Kramim, saying the settlers who purchased the land acted in “good faith” and were unaware they were building on privately owned Palestinian property.

That ruling was appealed to Israel’s Supreme Court, which ordered residents of Mitze Kramim to be evacuated. Wednesday’s decision by a larger panel allows settlers to remain there.