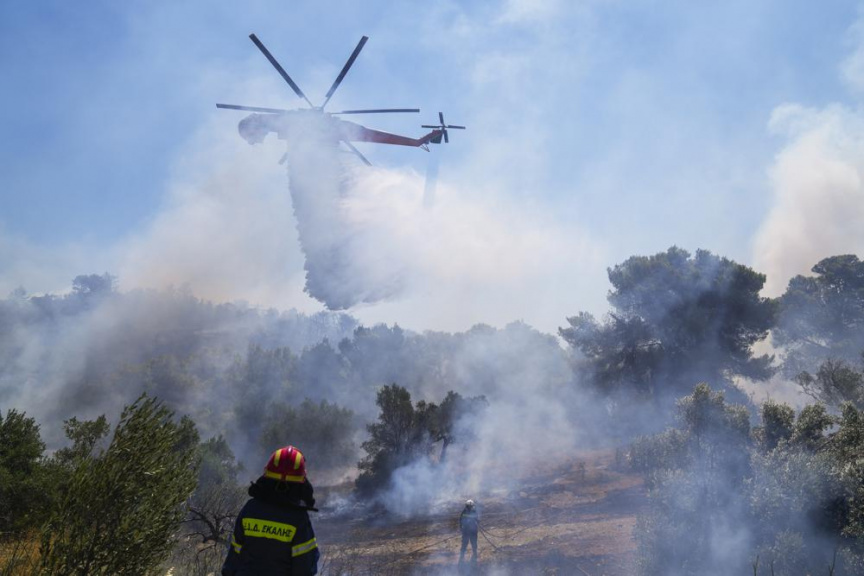 ATHENS, Greece (AP) — Battered by heavy winds, firefighters in Greece struggled to contain new fires Wednesday around the capital of Athens while other countries in southern Europe took stock of the damage caused during the latest severe heat wave and prepared for the return of scorching temperatures. Two new fires broke out west of Athens following a round-the-clock effort to halt a blaze in the outskirts of the city that had swept through inhabited areas and forced the evacuation of hundreds of residents. “Given the conditions created by climate change, we have new fires expanding,” Greece’s Civil Protection and Climate Change Minister Christos Stylianides said. “The conditions we are operating under are extremely adverse. Wind gusts have exceeded 110 kilometers per hour (68 mph) in some areas.” Fires were burning across southern Europe on Wednesday, but authorities in France, Spain and Portugal all reported improved conditions with a respite from the severe heat. French President Emmanuel Macron visited the country’s worst-hit Gironde region, in the southwest, meeting with firefighters who have been battling the flames for a week. French firefighters created huge firebreaks through threatened forests, using heavy machinery to tear out trees and roots, leaving large barren strips to stop the fires.

“You have saved lives,” Macron said, shaking hands with a group of firefighters lined up at the regional fire department.

The leader of the Gironde fire brigade, Marc Vermeulen, briefed the president on their formidable efforts to contain the blaze.

“We have never seen anything like this before,” he said, noting that 20-year-old pine trees were “exploding in the extreme heat.”

Greece has avoided the heat wave that hit countries in western Europe, including the U.K., this week, but fire officials say this summer’s hot and dry conditions, which have lasted for weeks, as well as longer-term temperature increases have increased the overall risk of forest fires. At least two people were hospitalized in the Greek capital with breathing problems and minor burns. Helicopters scooped up water pumped into outdoor tanks near homes on hillside suburbs before flying back into thick smoke to make the water drops.

Cooler weather gave firefighters in Spain and Portugal some respite but temperatures are forecast to rise back to 40 degrees Celsius (104 F) in the coming days.

Petteri Taalas, secretary-general of the World Meteorological Organization, said more frequent and more extreme heat waves were an inevitable consequence of climate change. “In the future, these kinds of heat waves are going to be normal. We will see stronger extremes. We have pumped so much carbon dioxide in the atmosphere that the negative trend will continue for decades,” Taalas said. “I hope that this will be a wake-up call for governments.” The European Union’s 27 nations have been pooling resources this summer to cope with the scale of the fires. European Crisis Management Commissioner Janez Lenarcic was in Slovenia, where an Italian water-dropping plane and a helicopter from Austria have joined army and firefighters struggling to contain a fire in the Kras area which has rapidly spread over from neighboring Italy. On the Italian side, homes were evacuated and part of a major highway was closed. Dry vegetation was helping to fuel the flames as northern Italy’s worst drought in decades drags on. Another fire burned in Tuscany, in the province of Lucca, Italian state radio said. In Spain, a spate of blazes in Spain’s northwestern Galicia region has burned 85 houses and forced the evacuation of 1,400 people. Spanish Prime Minister Pedro Sanchez visited the area late Tuesday and warned of “hard days ahead here in Galicia and the rest of Spain.”

Portugal’s health ministry says between July 7-18 the country’s excess mortality rate was 1,065 deaths, with officials blaming the heat wave for the spike and saying more heat deaths are likely in coming days as high temperatures return.