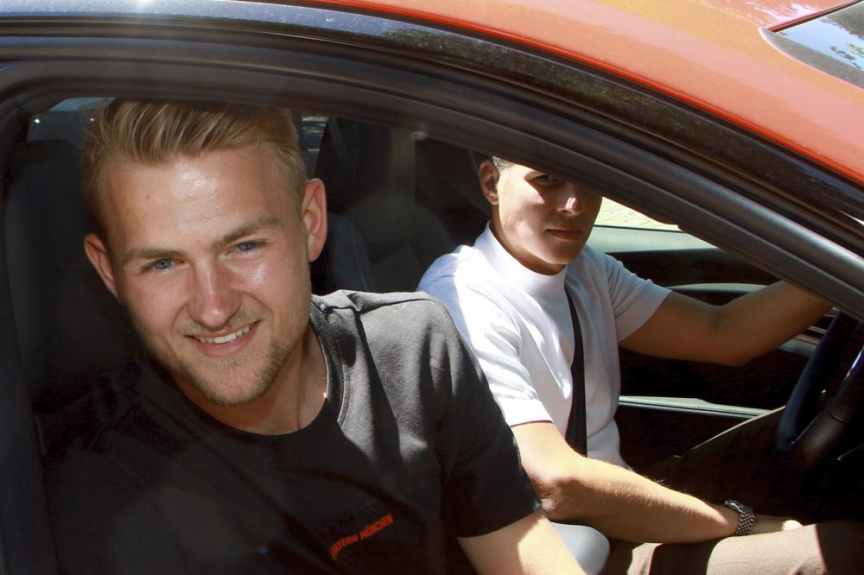 Matthijs de Ligt smiles from the window of a car as he leaves the offices of Bundesliga club FC Bayern Munich in Munich, Tuesday, July 19, 2022. (Mladen Lackovic/dpa via AP)

The 22-year-old De Ligt is Bayern’s first major signing since agreeing to sell star striker Robert Lewandowski to Barcelona last week, and Juventus said the fee for the Dutchman could increase by 10 million euros ($10.2 million) in conditional payments.

De Ligt arrives after three years and 117 games in all competitions for Juventus, where he won the Italian league and cup once each. He has played 38 games for the Netherlands.

“We wanted to bring Matthijs to Munich three years ago; we were already convinced by his qualities as a defender back then, and today we’re even more so,” Bayern sporting director Hasan Salihamidžić said. “With his professionalism, his hunger and his wonderful character, Matthijs fits in with our team and our ambitions. He’ll take on an important role at FC Bayern on and off the pitch.”

De Ligt started his career at Ajax and is the third former player from the Dutch club to join Bayern this offseason after the German champion signed midfielder Ryan Gravenberch from Ajax last month for 18.5 million euros ($18.8 million) with a potential 5.5 million euros ($5.57 million) in further payments, and also brought in right-back Noussair Mazraoui on a free transfer.

De Ligt’s arrival signifies Bayern is rebuilding its defense for the long term alongside 23-year-old Dayot Upamecano and 26-year-old Lucas Hernández. German defender Niklas Süle left Bayern for Borussia Dortmund at the end of last season when his contract expired after five years.

With Bayern yet to sign a specialist center-forward to replace Lewandowski, who was the Bundesliga’s top scorer in each of the last five seasons, coach Julian Nagelsmann may operate with a more fluid system up front next season. Bayern’s best-known forwards like Sadio Mané, Leroy Sané, Kingsley Coman and Serge Gnabry are primarily wide players who can be deployed in a central role. Eric Maxim Choupo-Moting was Bayern’s typical backup for Lewandowski but rarely started, and 21-year-old Joshua Zirkzee spent last season on loan in Belgium.

Bayern announced Saturday that Gnabry had signed a new contract through 2026.

Bayern starts its preseason with a game against D.C. United in the U.S. capital on Wednesday before playing Manchester City in Green Bay three days later. The first competitive game of the season is against Leipzig for the German Super Cup on July 30.

Kimmich out with lung problem after COVID infection

Bayern finally gets its man, signs Leroy Sané from City

Manuel Neuer back in Bayern squad for German Cup final