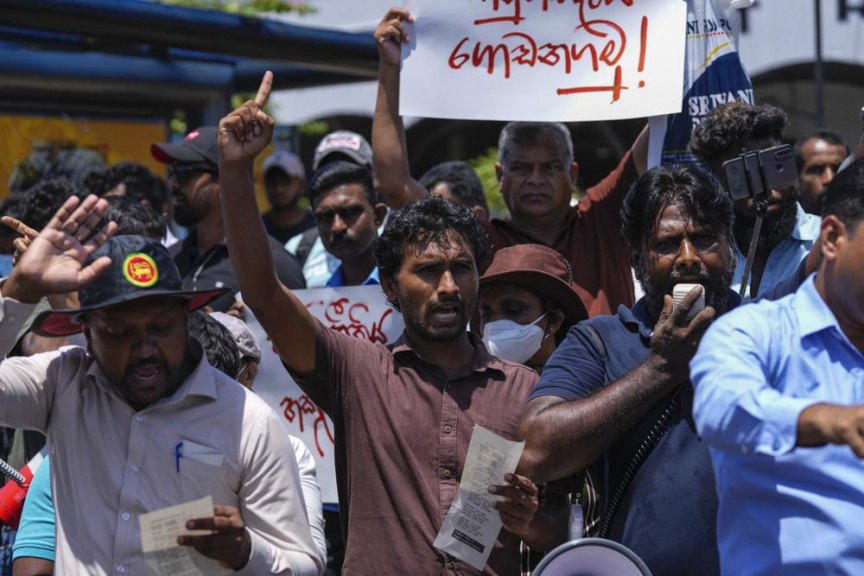 COLOMBO, Sri Lanka (AP) — Sri Lanka’s prime minister and acting president, Ranil Wickremesinghe, will face two rivals in a parliamentary vote Wednesday on who will succeed the ousted leader who fled the country last week amid huge protests triggered by its economic collapse.

Wickremesinghe, a six-time prime minister, is a seasoned politician with wide experience in diplomatic and international affairs and has been leading crucial talks on an economic bailout package with the International Monetary Fund.

He is backed by members of the fragmented ruling coalition, but is unpopular among voters who view him as a holdover from the previous government that led the country into economic catastrophe. The 73-year-old Wickremesinghe was appointed prime minister by deposed President Gotabaya Rajapaksa in May to help restore Sri Lanka’s international credibility.

The leading challenger, former government minister Dullas Alahapperuma, was nominated Tuesday by a breakaway faction of the ruling coalition after opposition leader Sajith Premadasa withdrew and said he would support him.

“For the greater good of my country that I love and the people I cherish I hereby withdraw my candidacy for the position of president,” Premadasa said in a Twitter post.

Rajapaksa fled the country after protesters outraged by the crisis stormed his official residence and occupied other key public buildings. He later submitted his resignation via an email to the speaker of Parliament.

Opponents of Wickremesinghe’s candidacy fear he represents an extension of the Rajapaksa rule and a potential comeback for the beleaguered political family.

The Supreme Court on Tuesday dismissed a petition against Wickremesinghe’s status as a lawmaker, clearing the path for him to run for president.

He succeeded Rajapaksa’s younger brother, Mahinda Rajapaksa, as prime minister after he stepped down in response to massive public pressure.

Wickremesinghe also took on the role of finance minister, becoming the public face of the country’s economic woes. He has delivered weekly addresses in Parliament, raised taxes and pledged to overhaul a government that increasingly has concentrated power under the presidency. Ultimately, observers say, he has lacked the political heft and public support to get the job done.

Alahapperuma, 63, is viewed as a populist, with good public relations and communications skills. Even though he is a former government spokesman and has served in various posts including minister of information and mass media, minister of sports and minister of power under previous governments he previously was not considered for top leadership posts.

A son of school administrators, he studied political science at the University of Iowa but did not earn a degree. He is married to a popular singer, Pradeepa Dharmadasa.

Students and political activists said they planned protests Tuesday. Some intimidating posts circulating on social media warned lawmakers against returning to their constituencies if they vote for Wickremesinghe.

After the protesters briefly took over public buildings last week in startlingly dramatic scenes, Parliament was heavily guarded Tuesday by hundreds of soldiers, its entry points barricaded. Staff at Parliament and reporters were thoroughly searched before they were allowed to enter while navy boats patrolled the lake surrounding the building.

Sri Lanka’s economy has collapsed, its foreign exchange reserves depleted, and it has suspended repayment of foreign loans. Its population is struggling with shortages of essentials including medicine, fuel and food while the government negotiates a bailout package with the IMF. It is preparing a loan restructuring plan as a prelude to talks.

Rajapaksa’s exit last week marked at least a temporary dismantling of the Rajapaksa dynasty that had ruled Sri Lanka for most of the past two decades. Before the recent upheavals, six family members held high positions including president, prime minister and finance minister. All have lost their seats after public protests started in late March.