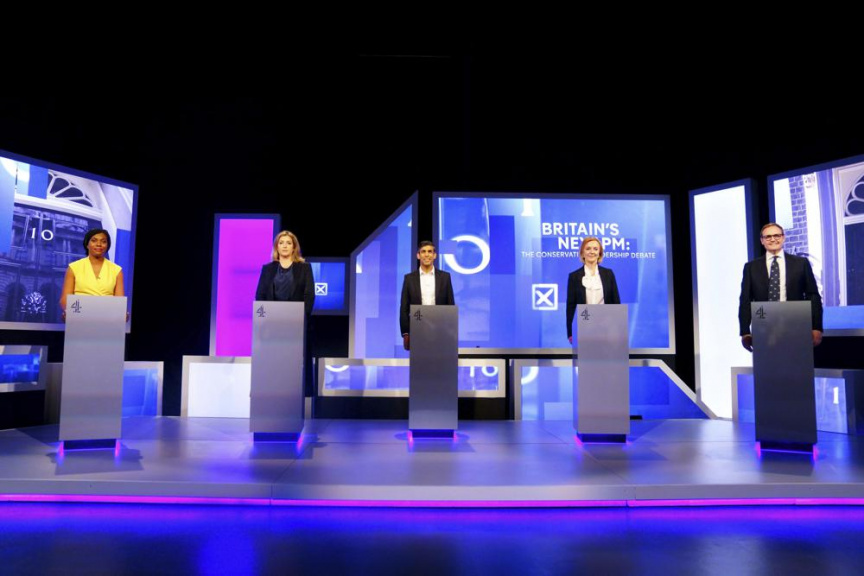 From left, Kemi Badenoch, Penny Mordaunt, Rishi Sunak, Liz Truss and Tom Tugendhat before the live television debate for the candidates for leadership of the Conservative party, hosted by Channel 4 in London, Friday, July 15, 2022. (Victoria Jones/PA via AP)

LONDON (AP) — The candidates to become the next British prime minister burnished their right-wing credentials Sunday, as they looked to remain in the race to succeed Boris Johnson.

Many of the five remaining hopefuls highlighted issues linked to Brexit and immigration as they attempted to woo fellow Conservative lawmakers ahead of a third round of voting on Monday, when another contender will drop out.

Even though the eventual winner will automatically become prime minister, the contenders must appeal to a narrow constituency of party members, who tend to be whiter, older and more right-wing than the general public. The candidates face a series of votes from lawmakers this week, who will narrow down the field to two, before facing a runoff among an estimated 180,000 Conservative Party members.

Writing in Britain’s Sunday Telegraph newspaper, the former Treasury chief Rishi Sunak, who is the frontrunner among Conservative lawmakers, pledged to tear up European Union laws as Britain beds down its position outside the bloc.

Appealing to the pro-Brexit party vote, Sunak wrote that he will have “scrapped or reformed all of the EU law, red tape and bureaucracy that is still on our statute book and slowing economic growth” by the time of the next election if he becomes the next prime minister.

Meanwhile, Trade Minister Penny Mordaunt, who became a surprise frontrunner and bookmaker favorite last week, was forced to challenge accusations that she had pushed through a policy to end the requirement for trans people to obtain a medical diagnosis of gender dysphoria before they could legally change gender when she was equalities minister in Theresa May’s government.

She told the BBC’s Sunday Morning program that she had managed a consultation with health care professionals but no policy had been developed while she was in the job.

Despite the demographics of the members, the race to succeed Johnson has been called the most diverse for a British prime minister. Sunak and Kemi Badenoch, a former equalities minister, are both non-white, while three of the remaining five contenders are women.

Badenoch, whose parents are from Nigeria, remains little known. But she has seen her star rise after her public showing in a television debate Friday, and led a poll of party members by the ConservativeHome website on Sunday.

She would be the first Black prime minister and, at 42, the youngest in more than 250 years.

Despite her background, she has made immigration control a key pillar of her political pitch, pledging Sunday to “do whatever it takes to deal with the small boats issue.” More than 14,000 migrants have made the 20-mile journey to Britain across the English channel from France so far this year.

Liz Truss, the foreign secretary, is touting her international experience, as Britain’s top diplomat and a former trade secretary, and is vowing to take a tough line with the European Union in post-Brexit trade spats.

The final candidate, Tom Tugendhat, trails his colleagues after the second round of voting. But he is making a virtue of having never sat in Boris Johnson’s government. He is calling for a “clean start” after the months of scandals that eventually saw Johnson signal his resignation.