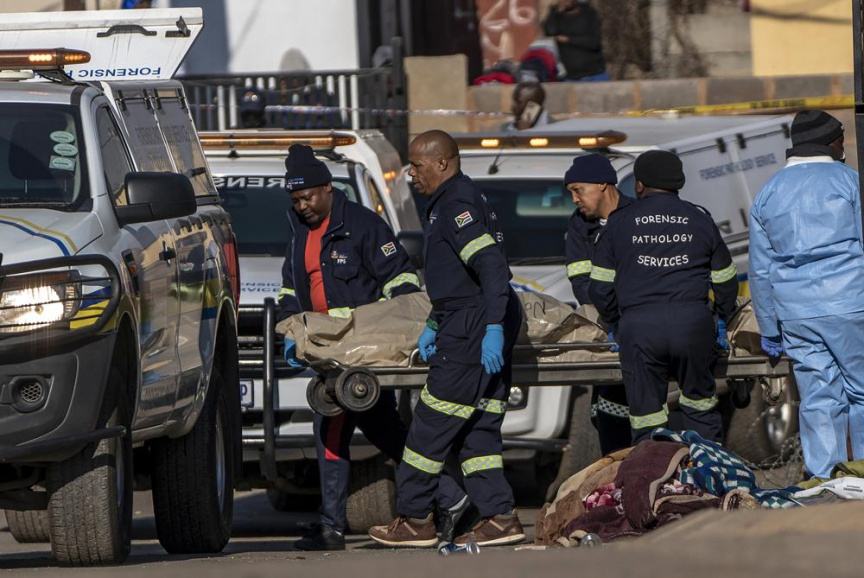 A body is removed from the scene of an overnight bar shooting in Soweto, South Africa, Sunday July 10, 2022. (AP Photo/Shiraaz Mohamed)

JOHANNESBURG (AP) — South Africa is reeling in shock from a spate of weekend bar shootings in which armed men burst into three taverns and opened fire indiscriminately, killing 21 people in total.

Regional and ethnic rivalries, an organized crime extortion ring, competition between bar owners and political enmities are all possible motivations for the shootings, say analysts. It’s not known if the shootings are linked.

The worst was in Johannesburg’s Soweto township in which 15 people were killed and several others seriously injured when several men charged into a bar and started shooting with AK-47 semi-automatic rifles late Saturday night, said police. More than 135 cartridges were found at the scene, indicating that the attackers were shooting to cause maximum casualties, police said.

A manhunt has been launched for 5 suspects in the Soweto shooting, Police Minister Bheki Cele said at a press conference Monday at the bar in the Nomzamo area where it took place. The suspects have been traced to Nongoma township in the coastal KwaZulu-Natal province, he said.

In the eastern city of Pietermaritzburg in KwaZulu-Natal province, gunmen opened fire in a tavern in the Sweetwaters area late Saturday night, killing four people, before speeding away in a small vehicle, said police. Two suspects have been arrested for that shooting.

Two more people were killed at a tavern in Katlehong township, in the Ekurhuleni area south of Johannesburg, when two gunmen opened fire on patrons late Friday night.

Notably in all three shootings the attackers did not rob the victims, security analyst at Good Governance Africa, Stephen Buchanan-Clarke.

“It is difficult to say definitively at this stage what the nature of these attacks is. It is quite telling though that in all three situations nothing was stolen. It seems the patrons targeted were done so to send a wider sort of message,” he told The Associated Press.

“So in that sense, it does resemble something similar to a political, organized terrorist attack than a purely criminal attack,” said Buchanan-Clarke.

“It is difficult to identify how these shootings should be characterized,” he said. “We are not sure whether those responsible were driven perhaps by purely criminal intentions, perhaps a sort of a turf war between rival taverns or rival criminal syndicates.

“We are not sure whether it is driven by a wider political agenda, perhaps trying to foment ethnic cleavages or stir up some political anger ahead of the ANC (ruling party) conference later this year,” he said.

Crime researcher, author and analyst Ziyanda Stuurman said the method of the shootings indicated possible involvement of organized crime. It could be an extortion gang “trying to squeeze a protection fee out of the tavern owners,” she told South Africa’s News24 website.

Police have deployed a special tactical response unit known as amabherethe to Soweto’s Nomzamo area where the shooting took place.

Amabherethe in township slang means berets, referring to the hats worn by the unit. The amabherethe forces, often criticized as heavy-handed, are to start patrolling the area on Monday afternoon, said Cele.

“Before you sleep tonight the “amabherethe” will be patrolling here, and we ask the community to cooperate with them,” said Cele.

“We want the police to take over these streets, so that it is us (police) running them, not these criminals,” said Cele.

The Gauteng Liquor Forum which represents tavern owners in the province, said it is concerned about an increasing number of violent attacks at South African taverns.

“While tavern owners have worked hard to improve security, they are simply no match for this level of indiscriminate and violent criminal behavior. Tavern owners are following government laws and regulations, but it appears that they are being targeted,” the group’s chairman Fanny Mokoena said.

Soweto residents on Monday told Cele that there was a huge number of illegal firearms in the area and pleaded with the police to deal with this situation.

One resident told The Associated Press that it was normal to hear gunshots go off in the area at night. When she heard the gunshots late Saturday night, she did not go out to investigate until she was called by a neighbor to see what had happened, she said.

“I went there to go look for my brothers. I ran here and jumped over the police tape to go see what was happening. I (was) looking through the bodies and noticed another of my next-door neighbors and I saw another man that I know,” said resident Ntombikayise Meji.

Amnesty International South Africa has condemned the killings and called for a thorough investigation by police.

“It is now up to the South Africa Police Service to conduct thorough, efficient and transparent investigations into the shootings that took place over the weekend and ensure that the perpetrators are charged in accordance with the law,” Amnesty International South Africa executive director Shenilla Mohamed said in a statement Monday. “We can no longer allow horrendous crimes in South Africa to continue with impunity.”