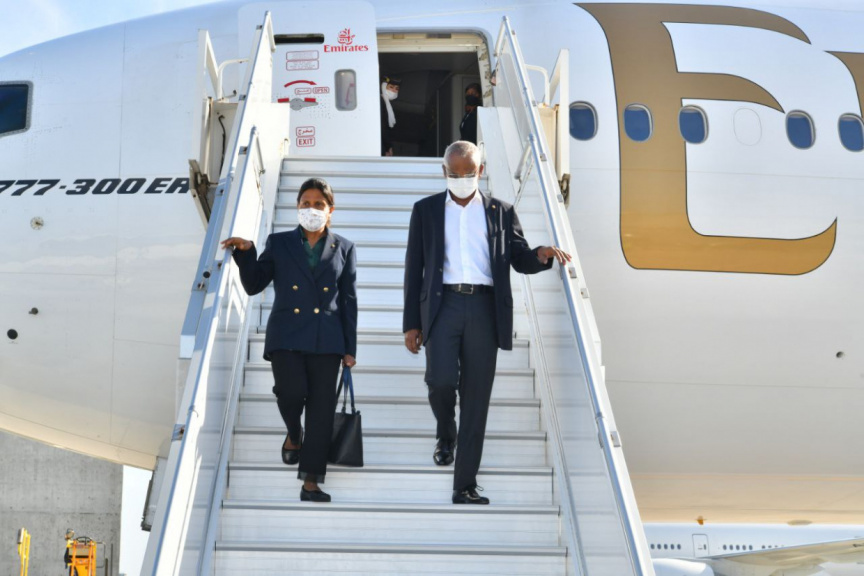 President Solih and First Lady Fazna descending from the flight. The couple has just concluded an official visit to Rwanda. (Photo / President's Office)

The President, First Lady Fazna Ahmed and a high-level delegation were in Kigali, Rwanda, to participate in the 26th Commonwealth Heads of Government Meeting (CHOGM).

This year's CHOGM was based on the theme "Delivering a Common Future: Connecting, Innovating, Transforming."

Notably, this was the first Commonwealth leaders’ meeting held since the Maldives’ re-accession to the bloc on February 1, 2020. Moreover, it was also the first meeting held in two years after delays due to the Covid-19 pandemic.

While in Kigali, President Solih attended the official opening ceremony and executive sessions of the meeting, which featured discussions on collaborating on an array of topics ranging from trade, health, and climate.

Additionally, on the sidelines, he met with the Prime Minister of Mauritius and the Minister of External Affairs of India to strengthen bilateral relations with those countries.

President Solih’s attendance at CHOGM cements the administration’s continued commitment to cooperate with the international community on shared goals such as democracy, peace, and prosperity.