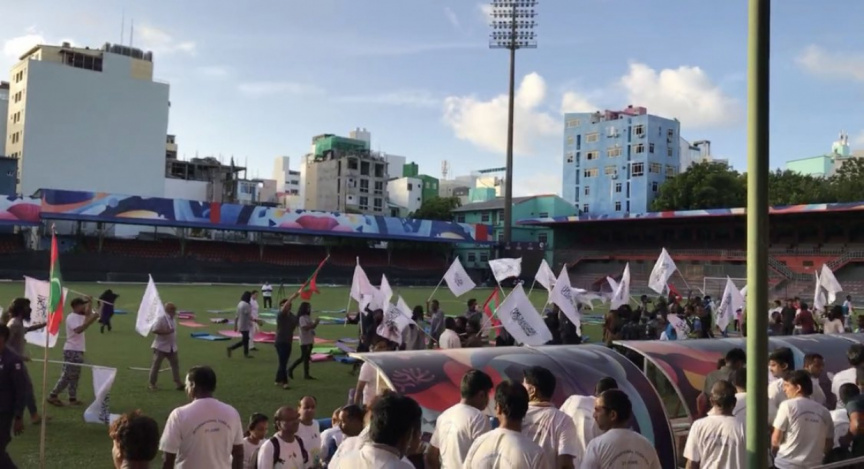 The religious organization “Ilmuveringe Gulhun” urged for transparency in the investigations ongoing in connection to the mob attack on the event held at National Stadium on June 21, in celebration of World Yoga Day.

In a report publicized by the organization, it presented 12 suggestions for the government as well as all the relevant parties.

Some of these include seeking advice from a considerable number of scholars before going ahead with any religious gathering, and should a scholar need to be arrested, to provide them with the opportunity to present themselves to the authorities.

Moreover, it asked to grant the usual rights any individual is given at the time of an arrest and to prevent any harm to their wives, children and family in the process.

Including Sheikh Adam Nishan and Sheik Fazloon Mohamed, a total of 19 individuals have been detained in connection to the event.

The report condemned the manner in which the scholars were arrested.

In addition to this, the report also detailed the actual plan for the yoga day and the events that took place at the scene. It stated that discussions were held between scholars, and it was decided that two will take part in it.

It also noted that many expressed concerns over the possible negative outcomes that may come from this.

The report claimed that when things got heated at the event, the scholars present attempted to calm the situation. It shared those concerns of members organization that the treatment of those who broke past the barricades into the event was less stringent than that of those who followed them and the scholars.

“Ilmuveringe Gulhun” is an organization formed in the aftermath of the controversial report by Maldivian Democracy Network.

Amidst all this, a letter has been uncovered that shows the Ministry of Islamic Affairs instructed the Police to stop the practice of yoga in Maldives, days before an event held in Male’ City.

Jamiyyath Salaf's Chief Marketing Officer Ali Rameez and Al-Sheikh Zamzam Farish posted a letter on Twitter on Saturday night, signed by Islamic Ministry’s Senior Executive Director Hisham Ahmed and addressed to Commissioner of Police Mohamed Hameed, stating that yoga, despite its widespread use for meditation, exercise and healing, was not permissible for Muslims, due to its use in Hindu worship.

The Yoga Day event was organized by the Indian Cultural Center and the Sports Ministry was held on the morning of June 21 and was attended by dozens of participants, including foreign ambassadors and diplomats.