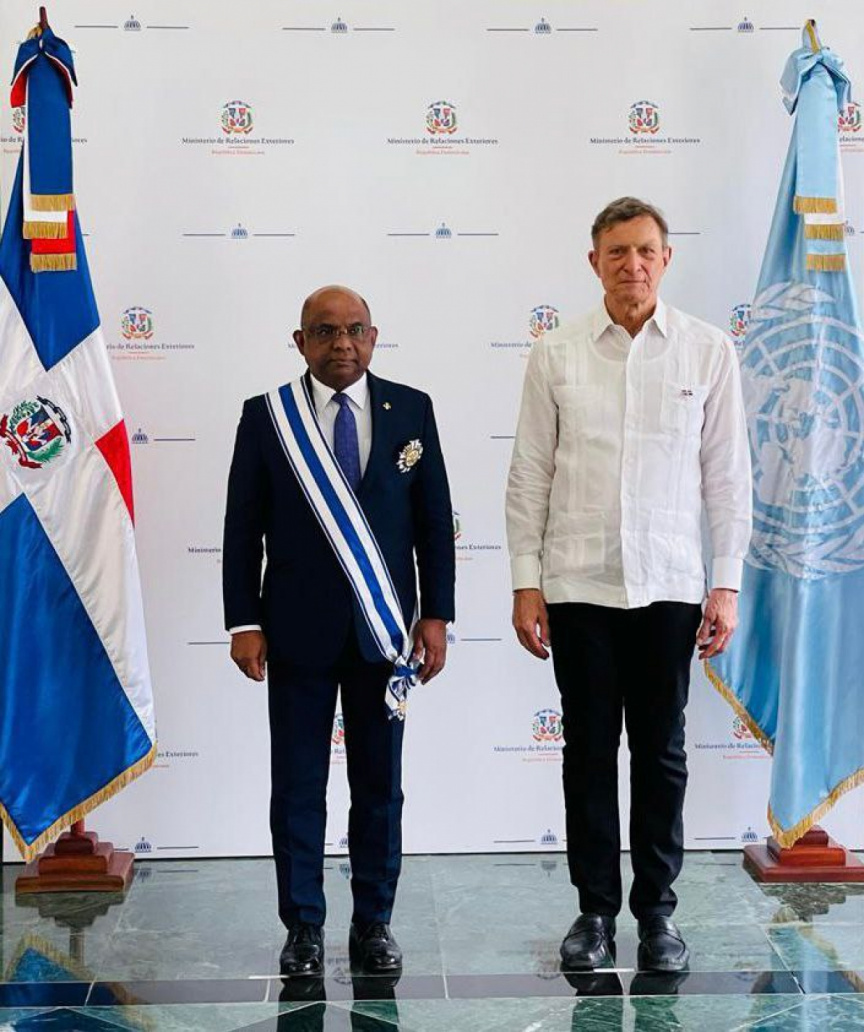 Abdulla Shahid, President of the 76th session of the United Nations General Assembly (UNGA) and Maldivian Minister of Foreign Affairs, was conferred the highest honour of the Dominican Republic - Duarte, Sanchez and Mella Order of Merit, Grand Cross, Silver Plate.

The President of the 76th session of the United Nations General Assembly (UNGA), and the Minister of Foreign Affairs Abdulla Shahid, has been conferred the highest honour of the Dominican Republic.

During a special ceremony held in Santo Domingo, the capital city of the country, Shahid was conferred Duarte, Sanchez & Mella Order of Merit, Grand Cross, & Silver Plate by Roberto Álvarez, Foreign Minister of the Dominican Republic.

Shahid was recognized for his work as the President of UNGA under his “Presidency of Hope”, which comprised of the 'five rays of hope'. These are recovering from the Covid-19 pandemic, rebuilding sustainably, responding to the needs of the planet, respecting the human rights of all and revitalizing the UN.

Acknowledging the recognition, Shahid said that he was deeply honoured.

"I humbly accept this conferment which is bestowed for distinguished services and deeds for humanity."

The UNGA President arrived in the Dominican Republic on June 16.

As part of his visit, he paid a call on President Luis Abinader, during which the diplomats discussed coordination between the United Nations General Assembly and the Dominican Republic.

In addition to this, he would also be visiting Hogar del Niño, to see the country's efforts toward development of sustainable tourism.

Established in 1931, the Duarte, Sanchez and Mella Order of Merit is named after the founding fathers of the Dominican Republic; Juan Pablo Duarte, Francisco del Rosario Sánchez, and Ramón Matías Mella Castillo.

It is granted for distinguished services to the Dominican Republic as well as the international community.