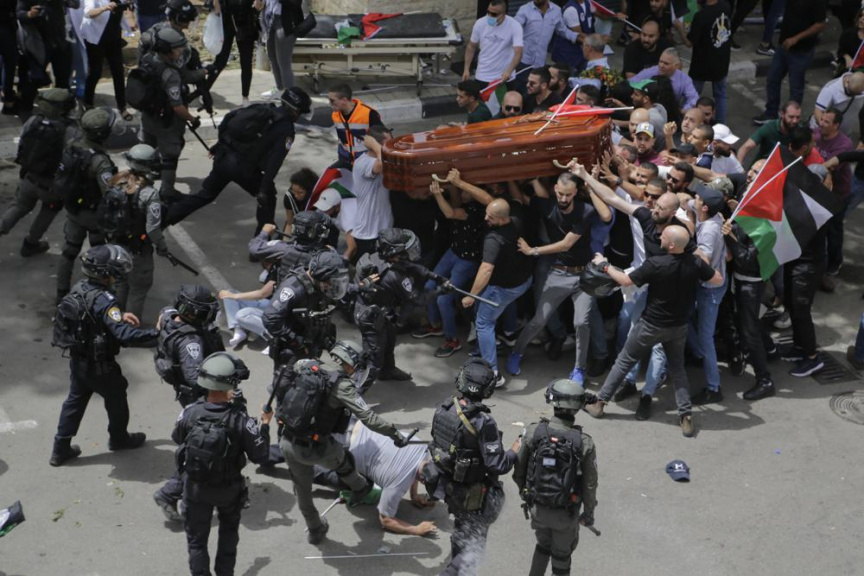 Israeli police confront with mourners as they carry the casket of slain Al Jazeera veteran journalist Shireen Abu Akleh during her funeral in east Jerusalem, Friday, May 13, 2022. (AP Photo/Maya Levin)

JERUSALEM (AP) — An Israeli police investigation has found that police engaged in misconduct during the funeral of slain Al Jazeera journalist Shireen Abu Akleh, but those who supervised the event will not face serious punishment, an Israeli newspaper reported Thursday.

Israeli riot police pushed and beat mourners at the funeral, causing the pallbearers to nearly drop the casket in a shocking start to the May 14 procession in east Jerusalem.

The violence drew international condemnation and added to the sense of grief and outrage across the Arab world that followed the death of Abu Akleh, who was killed on May 11 while covering an Israeli military raid in the occupied West Bank.

Witnesses and Palestinian officials say Abu Akleh was deliberately targeted by Israeli troops, while the Israeli military says she was killed during a shootout with Palestinian gunmen and it is unclear who fired the fatal bullet.

But it said police had determined prior to the investigation that the commanders who oversaw the event would not be disciplined. The report said that it was suitable for police to use violence under the circumstances but could have refrained from using clubs.

It was not clear if any of the officers who beat the pallbearers would be punished.

“Obviously the images that emerged were unpleasant and could have been different, but overall the police acted well in a complex and violent incident,” the paper quoted an unidentified senior police officer as saying.

In a statement, Israel’s national police chief, Kobi Shabtai, confirmed that he had ordered the probe to “learn lessons and improve the operational procedures” of the police. He appeared to acknowledge police shortcomings, but also cast blame on the mourners.

“One cannot remain indifferent to the difficult images and it is our obligation to probe these matters so that sensitive events like these will not descend into violence by rioters and will retain the required respect,” he said.

His statement gave no details on the actual findings of the probe or consequences for those who oversaw the events.

Thousands of Palestinians attended the funeral of Abu Akleh, 51, who was a household name across the Arab world for her reporting on life under Israeli rule. A 25-year veteran of the satellite channel, she was revered by Palestinians as a local hero.

Israel has said it has identified a soldier’s rifle that might have killed Abu Akleh, but that it cannot make a final determination without matching it to the bullet. The Palestinians have refused to turn over the bullet, saying they do not trust Israel.

A reconstruction by The Associated Press lent support to the assertions by Palestinian authorities and Abu Akleh’s colleagues that she was killed by Israeli fire. But it said a conclusive answer remained elusive because of the lack of trust and the need for further forensic evidence.