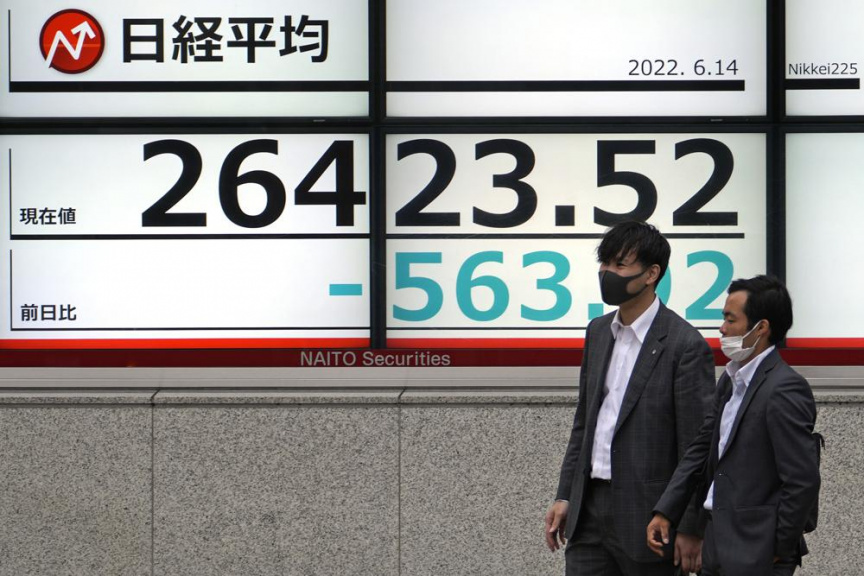 TOKYO (AP) — Asian shares fell across the board Tuesday after Wall Street tumbled into a bear marketame, indicating that major U.S. benchmarks and individual stocks have fallen 20% or more from a recent high for a sustained period of time.

At the center of the selloff was the U.S. Federal Reserve, which is scrambling to get inflation under control. Its main method is to raise interest rates, a blunt tool that could slow the economy too much and risk a recession if used too aggressively.

Some economists are speculating the Fed on Wednesday may raise its key rate by three-quarters of a percentage point. That’s triple the usual amount and something the Fed hasn’t done since 1994.

“Another day to digest the recent U.S. inflation data, and another day closer to the June FOMC meeting, and global markets, we well as those here in Asia have been demonstrating that they don’t like where the global economy sits right now,” Robert Carnell, regional head of research Asia-Pacific at ING, said in a report.

Adding to worries about the fragile Japanese economy is the sliding yen, recently at 135, the lowest level against the U.S. dollar since 1998. The U.S. dollar fell to 134.40 Japanese yen from 134.46 yen, as the yen’s weakness was mitigated somewhat by Bank of Japan Gov. Haruhiko Kuroda’s comments expressing concern about its decline.

“Against this backdrop, equities in Asia are unlikely to be spared pain,” said Tan Boon Heng at Mizuho Bank in Singapore.

The decline was the first chance for investors to trade after having the weekend to reflect on Friday’s news that inflation is getting worse, not better.

With the Fed seemingly pinned into having to get more aggressive, prices fell in a worldwide rout for everything from bonds to bitcoin, from New York to New Zealand. Some of the sharpest drops hit what had been big winners of the easier low-rate era, such as high-growth technology stocks and other former darlings of investors. Tesla slumped 7.1%, and Amazon dropped 5.5%. GameStop tumbled 8.4%.

“The best thing people can do is to not panic and don’t sell at the bottom,” said Randy Frederick, managing director of trading and derivatives at the Schwab Center for Financial Research, “and we’re probably not at the bottom.”

Markets are bracing for more bigger-than-usual hikes, on top of some discouraging signals about the economy and corporate profits, including a record-low preliminary reading on consumer sentiment soured by high gasoline prices.

The economy is still holding up overall, but the danger is that the job market and other factors are so hot that they will feed into higher inflation.

Wall Street’s sobering realization that inflation is accelerating, not peaking, has sent U.S. bond yields to their highest levels in more than a decade. The two-year Treasury yield shot to 3.36% from 3.06% late Friday in its second straight major move. It earlier touched its highest level since 2007, according to Tradeweb.

The 10-year yield jumped to 3.37% from 3.15%, and the higher level will make mortgages and many other kinds of loans more expensive. It touched its highest level since 2011.

The higher yields mean prices are tumbling for bonds. That happens rarely and is a painful hit for older and more conservative investors who depend on them as the safer parts of their nest eggs.

Some of the biggest hits came for cryptocurrencies, which soared early in the pandemic as ultralow rates encouraged some investors to pile into the riskiest investments. Bitcoin tumbled more than 14% from a day earlier and dropped below $23,400, according to Coindesk. It’s back to where it was in late 2020 and down from a peak of $68,990 late last year.

Stocks lower after US indexes tumble on recession fear

Global trade is at stake as Trump and Xi meet