IFC-IOR: Ensuring maritime security of Indian Ocean around the clock 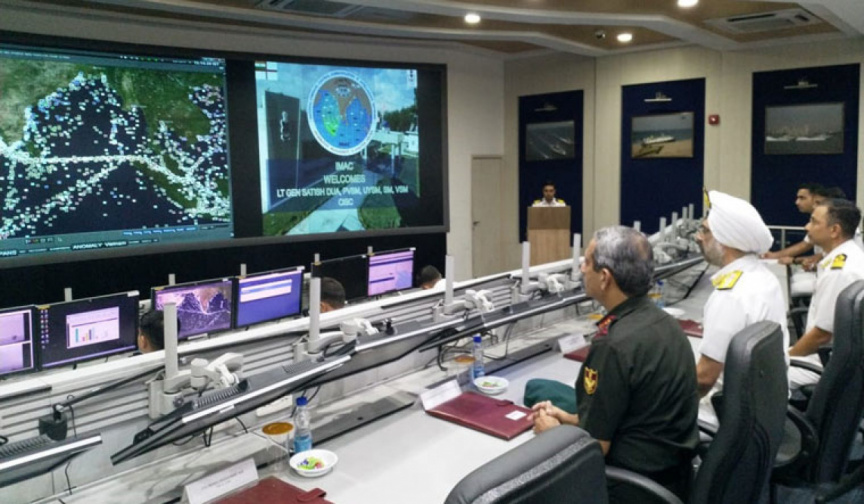 (Gurugram, India) Piracy and armed robbery, human and drug trafficking, illegal, unregulated and unreported fishing, poaching, arms running and maritime terrorism are several mentions amongst the plethora of threats faced in the maritime domain of the Indian Ocean; the third-largest of the world’s five oceanic divisions – stretching over 70,00,000 square kilometres.

As the citizens of countries bordering Indian Ocean – which are homes to approximately 2.5 billion people – go on with their lives; officials based at the Information Fusion Centre – Indian Ocean Region (IFC-IOR) are busy monitoring the maritime security of the regional waters around the clock, to effectively combat threats aforementioned amongst others.

On a particularly warm morning, a delegation of Maldivian journalists, myself included, travelled via bus from India’s New Delhi to Gurguram; a trip that was roughly almost two hours. Our very destination; IFC-IOR, hosted by the Indian Navy, established by the Government of India at Gurugram on December 22, 2018.

Ahead of entrance to the establishment – our delegation was strictly instructed against the use of mobile phones on the premise due to the sensitive nature of the work being carried out.

Upon entrance – we were welcomed by the centre’s commander alongside other senior officials involved in the centre’s operations. As Maldivians, we were most delighted and proud to meet Maldives National Defense Force’s (MNDF) Major Hassan Nadheem, stationed at the centre for a two-year term in the capacity of an International Liaison Officer (ILO). Apart from Major Nadheem, the centre also hosts ILOs from other partner nations including Australia, France, Singapore and Mauritius.

Following a warm welcome which can only be attributed to excellent hospitality, our delegation was led to a conference room where the centre’s commander and senior officials including Major Nadheem briefed us on the operations of IFC-IOR.

IFC-IOR was established for the purpose of strengthening maritime security and safety in the Indian Ocean region. The centre achieves this by building a common coherent maritime situation picture and acting as a maritime security information sharing hub for the region. Information exchange takes place through various forms including physical interactions, video conferencing, website, email etc.

Since inception – the centre has linked itself with over 50 nations and multinational maritime security centres. Furthermore, the centre hosts ILOs from 10 partner nations – with more expected to join – to enable better cooperation.

With an insight into the critical work carried out at IFC-IOR – our delegation was then led inside the main surveillance room where it all goes down. In this room, which is never empty, what grabs our attention is the huge screen showing a live feed of the whole of Indian Ocean through satellite, CCTV and complex digital softwares. Through these means – the centre actively monitors and tracks thousands of sea vessels operating in the region in real-time, as well as marine traffic. They also provide easy access to details pertaining to the sea vessels, weather developments and other developments in the maritime domain within the region. At the slightest detection of danger – the nearest country's authorities are immediately alerted.

Whereas oceans and seas cover 71 percent of the earth’s surface, it is not wrong to assume that ensuring maritime security and safety is not an easy task – perhaps a task too hard for one country to handle on its own, no matter how well equipped. Nevertheless, maritime security and safety is essential for every country in safeguarding their national security, citizens, economy and environment.

For an island nation such as the Maldives, surrounded by waters; being part of an initiative such as IFC-IOR is significantly important in combatting maritime threats faced locally such as drug trafficking and illegal and unregulated fishing.

Therewith, as Maldivians, our delegation was able to leave IFC-IOR with a peace of mind in respect to maritime security and safety of not just the territorial waters of Maldives, but the whole Indian Ocean region.