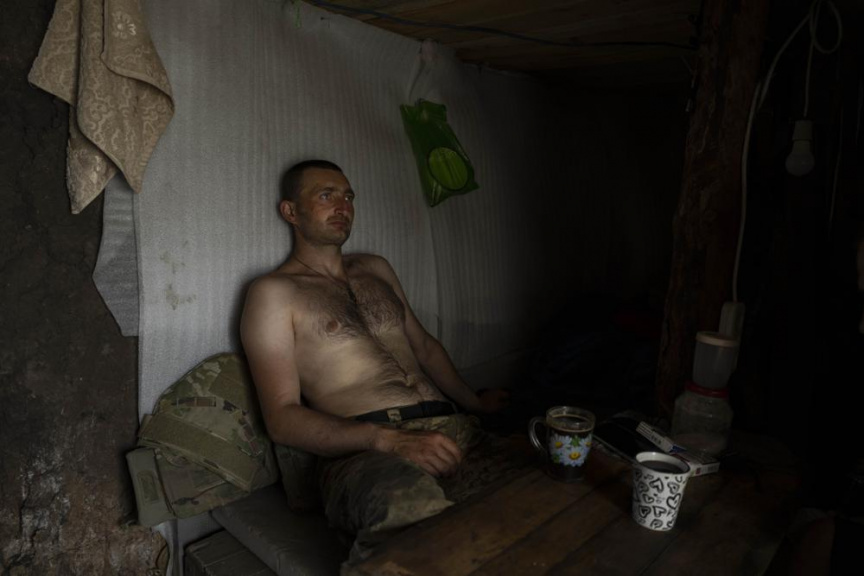 BAKHMUT, Ukraine (AP) — The human cost of the war in Ukraine mounted as workers pulled up to 100 bodies from each smashed building in the devastated city of Mariupol — a gruesome effort that one official described as an “endless caravan of death.”

Meanwhile, fears of a global food crisis escalated over Ukraine’s inability to export millions of tons of grain through its blockaded ports.

At the same time, Ukrainian and Russian forces battled fiercely Wednesday for control of Sievierodonestk, a city that has emerged as central to Moscow’s grinding campaign to capture Ukraine’s eastern industrial heartland, known as the Donbas.

Many buildings in Mariupol contain 50 to 100 bodies each, according to a mayoral aide in the Russian-held port city in the south.

Petro Andryushchenko said on the Telegram app that the bodies are being taken in an “endless caravan of death” to a morgue, landfills and other places. At least 21,000 Mariupol civilians were killed during the weeks-long Russian siege, Ukrainian authorities have estimated.

The consequences of the war are being felt far beyond Eastern Europe because shipments of Ukrainian grain are bottled up inside the country, driving up the price of food.

Ukraine, long known as the “bread basket of Europe,” is one of the world’s biggest exporters of wheat, corn and sunflower oil, but much of that flow has been halted by the war and a Russian blockade of Ukraine’s Black Sea coast. An estimated 22 million tons of grain remains in Ukraine. The failure to ship it out is endangering the food supply in many developing countries, especially in Africa.

Russia expressed support Wednesday for a U.N. plan to create a safe corridor at sea that would allow Ukraine to resume grain shipments. The plan, among other things, calls for Ukraine to remove mines from the waters near the Black Sea port of Odesa.

But Russia is insisting that it be allowed to check incoming vessels for weapons. And Ukraine has expressed fear that clearing the mines could enable Russia to attack the coast. Ukrainian officials said the Kremlin’s assurances that it wouldn’t do that cannot be trusted.

European Council President Charles Michel on Wednesday accused the Kremlin of “weaponizing food supplies and surrounding their actions with a web of lies, Soviet-style.”

While Russia, which is also a major supplier of grain to the rest of the world, has blamed the looming food crisis on Western sanctions against Moscow, the European Union heatedly denied that and said the blame rests with Russia itself for waging war against Ukraine.

“These are Russian ships and Russian missiles that are blocking the export of crops and grain,” Michel said. “Russian tanks, bombs and mines are preventing Ukraine from planting and harvesting.”

The West has exempted grain and other food from its sanctions against Russia, but the U.S. and the EU have imposed sweeping punitive measures against Russian ships. Moscow argues that those restrictions make it impossible to use its ships to export grain, and also make other shipping companies reluctant to carry its product.

Turkey has sought to play a role in negotiating an end to the war and in brokering the resumption of grain shipments. Turkish Foreign Minister Mevlut Cavusoglu met Wednesday with his Russian counterpart, Sergey Lavrov. Ukraine was not invited to the talks.

Moscow’s troops continued their painstaking, inch-by-inch campaign for the Donbas region with heavy fighting in and around Sievierodonetsk, which had a prewar population of 100,000. It is one of the last cities yet to be taken by the Russians in Luhansk, one of the two provinces that make up the Donbas.

Ukrainian President Volodymyr Zelenskyy called Sievierodonetsk the “epicenter” of the battle for the Donbas and perhaps one of the most difficult battles of the war.

He said the Ukrainian army is defending its positions and inflicting real losses on the Russian forces.

“In many ways, it is there that the fate of our Donbas is being decided,” Zelenskyy said in his nightly video address, which was recorded in the street outside his office in Kyiv.

An adviser to Zelenskyy’s office said Russian forces have changed their tactics in the battle, retreating from the city while pounding it with artillery and airstrikes.

As a result, Oleksiy Arestovych said, the city center is deserted, and the artillery hits an empty place.

“They are hitting hard without any particular success,” he said in his daily online interview.

Luhansk Gov. Serhiy Haidai acknowledged the difficulties of battling Russian forces, saying, “Maybe we will have to retreat, but right now battles are ongoing in the city.”

“Everything the Russian army has — artillery, mortars, tanks, aviation — all of that, they’re using in Sievierodonetsk in order to wipe the city off the face of the Earth and capture it completely,” he said.

The city of Lysychansk, like Sievierodonetsk, is also wedged between Russian forces in Luhansk province. Valentyna Tsonkan, an elderly resident of Lysychansk, described the moment when her house came under attack.

“I was lying on my bed. The shrapnel hit the wall and went through my shoulder,” she said as she received treatment for her wounds.

Russia’s continuing encroachment could open up the possibility of a negotiated settlement between the two nations more than three months into the war, analysts said.

Russian President Vladimir Putin “has the option of declaring his objectives met at more or less any time in order to consolidate Russia’s territorial gains,” said Keir Giles, a Russia expert at the London think tank Chatham House. At that point, Giles said, Western leaders may “pressure Ukraine to accept their losses in order to bring an end to the fighting.”

Zelenskyy said Russia is unwilling to negotiate because it still feels strong.

Speaking by video link to U.S. corporate leaders, he called for even tougher sanctions to weaken Russia economically, including getting it “off the global financial system completely.”

Zelenskyy said Ukraine is willing to negotiate “to find a way out.” But a settlement cannot come “at the expense of our independence.”

Fire by suspected arson in S. Korea kills at least 7