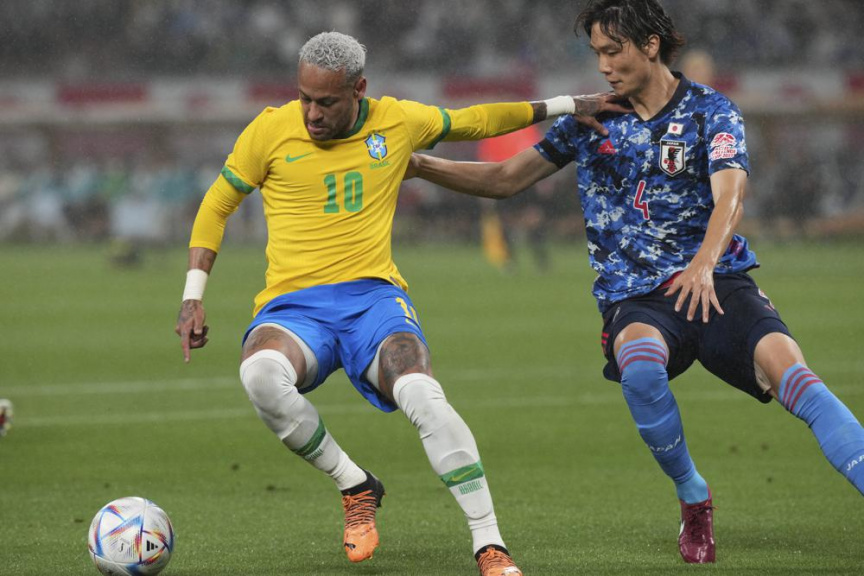 Neymar of Brazil, left, fights for the ball against Kou Itakura of Japan during a friendly match at the National Stadium in Tokyo Monday, June 6, 2022. (AP Photo/Eugene Hoshiko)

TOKYO (AP) — Brazil defeated Japan 1-0 in a friendly Monday thanks to a penalty by Neymar in the 77th minute after he was tripped in the box on a rainy night at Tokyo’s new National Stadium.

It was Neymar’s 74th goal for the national team, leaving him three short of matching the record held by Pele. He also scored two penalties last week in a 5-1 victory over South Korea as Brazil tested itself on an Asian tour against two teams who qualified for the World Cup.

Japan is now winless against Brazil in 13 matches (11 losses and 2 draws). Brazil also stretched its unbeaten run to 13 games. Its last loss came just under a year ago to Argentina in the Copa America final.

Defender Marquinhos knows Brazil was fortunate to get away with the narrow victory.

“We expected this to be a tougher match, but we also played better against South Korea,” Marquinhos said. “We made some mistakes that gave them confidence. This is a good test against a team that is ready for the World Cup.”

Brazil, an early favourite along with defending champion France, is grouped with Cameroon, Switzerland and Serbia at the World Cup. Japan was drawn into the toughest group and must face Germany and Spain in Qatar. Costa Rica or New Zealand will fill the other place.

“Sometime in the World Cup all you need is to win 1-0, and that’s what we did today,” the Brazilian defender added.

Brazil coach Tite said his team is “much better prepared” than it was four years ago going to the World Cup in Russia. Tite took over that team after Dunga was fired in 2016, two years ahead of the World Cup.

“The previous cycle (2016-18) brought me the experience,” he said. “I don’t underestimate that. I didn’t think I would be this long with the national team.”

Tite said he had hoped to play England or France before the World Cup, which proved impossible. He said he’s now looking for a team ranked in the top 30 for a match, perhaps in September.

Brazil had most of the possession and had several chances to score more goals, with Neymar missing a couple of opportunities from open play.

Brazil made four changes from the team that defeated South Korea. Dropped to the bench were goalkeeper Weverton, defender Thiago Silva, left-back Alex Sandro and striker Richarlison. In their places, Alisson started in goal, Eder Militao and Guilherme in defence, and Vinicius Junior at striker.

Lucas Paqueta hit the post just a minute into the match, Fred hit the crossbar 10 minutes later, and Raphinha forced Japanese goalkeeper Shuichi Gonda to make the first save of the match from a close-range shot about 20 minutes into the game.

Neymar had his best chance midway through the first half but Gonda dived to his left to stop the effort. Gonda denied him again just before halftime, while Raphinha also missed a free kick late in the half.

Japan posed some threats early with Junya Ito trying to cross balls in from the right-wing, forcing several corners, and also pressed early in the second half without managing to test goalkeeper Alisson, who had a quiet night.

In another friendly between Asian and South American teams, South Korea beat Chile 2-0. Hwang Hee-chan and Son Heung-min scored a goal each at home in Daejeon.

Neymar to stand trial in Spain for Barcelona transfer