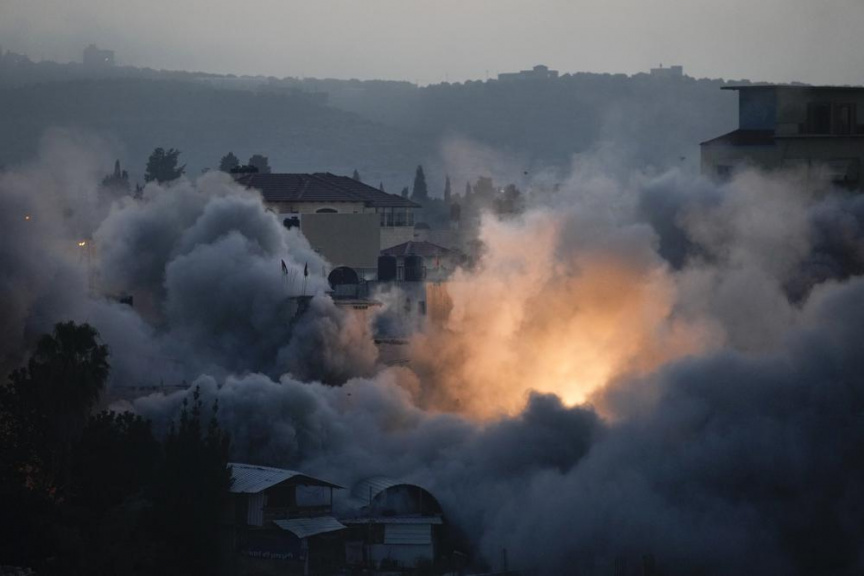 Israeli troops blow up the house of Palestinian in the West Bank village of Yabed, Thursday, June 2, 2022. (AP Photo/Majdi Mohammed)

TEL AVIV, Israel (AP) — Israeli forces shot and killed a Palestinian in the West Bank on Thursday, the Palestinian Health Ministry said, as troops elsewhere demolished the home of a Palestinian who gunned down Israelis in an attack earlier this year.

The Ministry identified the man as Ayman Mheisen, 29. The Israeli military said forces operating in the Dheisheh refugee camp in the West Bank city of Bethlehem were pelted with rocks and explosive devices. The troops responded with live fire, according to the military.

Meanwhile, a blast from the home demolition in the West Bank village of Yaabed lit up the night sky early Thursday. Video released by the Israeli military showed soldiers preparing the house for demolition and an explosion ripping through the three-floor building. The military said forces exchanged fire with Palestinian gunmen at the scene.

The Palestinian whose home was demolished methodically gunned down five people in the Israeli city of Bnei Brak in March. Israel uses home demolitions as a deterrent to prevent further attacks. Critics see the tactic as a form of collective punishment.

On Wednesday, Israeli forces killed two Palestinians, including a woman who was said to have been carrying a knife.

The events come during a wave of Israeli-Palestinian violence, where a spate of Palestinian attacks set off near-daily arrest raids by Israel in the West Bank.

The tensions were further fueled by clashes at a key Jerusalem mosque and the killing of a well-known Palestinian-American journalist. The Palestinians and witness say she was killed by Israeli fire, while Israel says it’s not clear if soldiers or Palestinian gunmen fired the deadly bullet.

At least 19 people have been killed in Palestinian attacks in recent months. At least 35 Palestinians have been killed by Israel. Some were gunmen killed in fighting with Israel, while others were shot while allegedly throwing stones or firebombs at Israeli troops in the West Bank. But an unarmed woman and at least two people who appear to have been bystanders were also among those killed.

Israel to allow West Bank's Palestinians to use airport

No more Turkey: Country in push to be known ‘Türkiye'