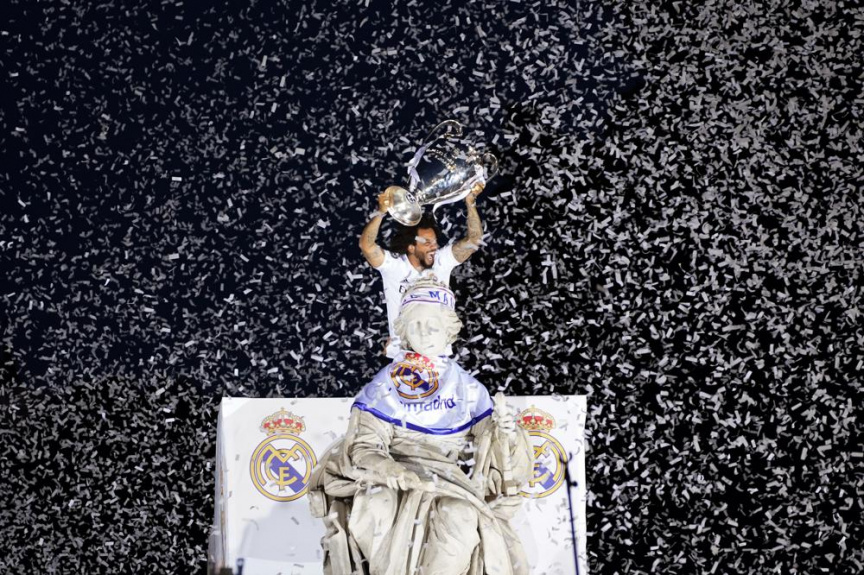 Real Madrid player Marcelo holds the trophy at the Cibeles square during a trophy parade in front of the City Hall in Madrid, Spain, Sunday, May 29, 2022. (AP Photo/Andrea Comas)

MADRID (AP) — Lifting yet another Champions League trophy, Marcelo put an end to his era at Real Madrid.

The veteran Brazilian left back said after the team’s 1-0 win over Liverpool in the Champions League final on Saturday that he will not continue playing for the club.

“It was my last match with Real Madrid,” the 34-year-old Marcelo said. “I’m not sad. I couldn’t be happier as I leave the club. I’m very thankful. It’s the end of a very beautiful cycle.”

It was an emotional farewell for Marcelo as Madrid celebrated the title with its fans throughout Sunday. He received huge cheers from supporters and was thrown into the air by his teammates a few times.

Marcelo cried as he addressed the crowd at the Santiago Bernabéu Stadium but said there was no reason to be sad.

“I am very happy,” he said. “I’m saying goodbye after winning another Champions League title.”

Marcelo is leaving 16 years after he joined from Brazilian club Fluminense in 2006 to take over from Brazil great Roberto Carlos.

Marcelo said he plans to play another couple of years before retiring, but gave no hints about where. He said coaching is not in his plans for the future.

“I don’t think coaching is for me. I think I’m bad at it, I’m not good with tactics. I have no idea how that works,” Marcelo said with a smile.

He said later that he wants to somehow be involved with Real Madrid. His son, Enzo, plays for the club’s youth teams.

Marcelo had won his 24th trophy with the club last month, when Madrid won the Spanish league for a record-extending 35th time. He won his 23rd title in the Spanish Super Cup in January, tying great Francisco “Paco” Gento, whose heyday was the 1950s and 60s.

Marcelo lost his spot as a starter this season and hadn’t played often under coach Carlo Ancelotti. He did not get to play in Saturday’s final.

Other players expected to leave Madrid this season include Gareth Bale, Marco Asensio and Francisco Isco. Luka Modric is set to have his contract renewed.

Marcelo’s former Brazil teammate, Dani Alves, has the most career titles with 41, most of them with Barcelona.