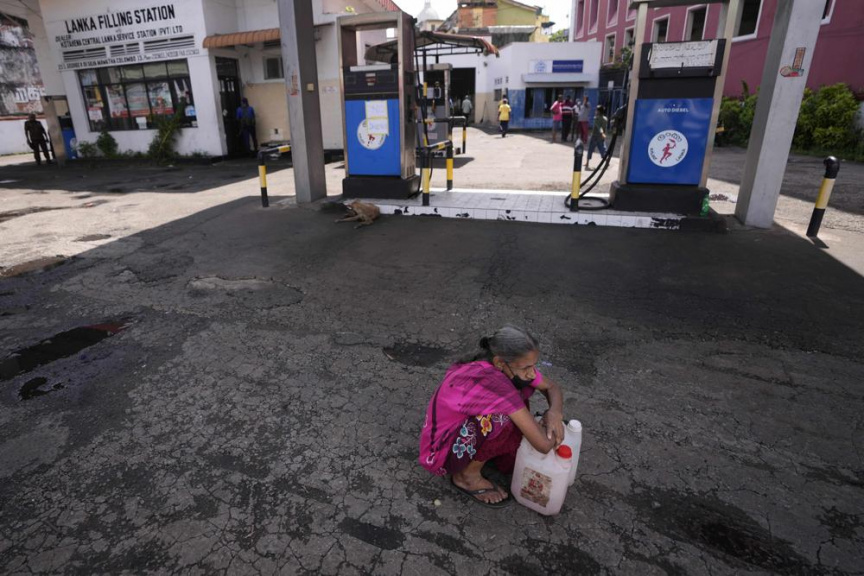 A Sri Lankan woman waits in a deserted gas station, hoping to buy kerosene oil for cooking in Colombo, Sri Lanka, Thursday, May 26, 2022. Sri Lankans for months have been forced to stand in long lines to buy scarce essentials, with many returning home empty-handed. There is a severe shortage of many goods, from food, cooking gas, medicine and fuel to toilet paper and matchsticks. (AP Photo/Eranga Jayawardena)

COLOMBO, Sri Lanka (AP) — Sri Lanka’s prime minister said Thursday that he will quickly prepare an economic reform program and seek approval from the International Monetary Fund — because of global inflation and the financial impact of Russia’s invasion of Ukraine on other countries could limit their ability to help the island nation.

Prime Minister Ranil Wickremesinghe said that officials have reached an agreement on basic reform concepts with the IMF and that he plans to have the economic reform program ready within two weeks. After it is finalized, an IMF delegation will visit Sri Lanka to evaluate the program.

“I have placed my special attention on this because of the present global situation, the war in Ukraine and global inflation. From what we can see a number of countries may have to face economic problems like ours,” Wickremesinghe said.

He added: “At the moment the United States and the Europe are spending a lot on the war and there is a possibility of the aid given to us being reduced.”

Sri Lanka is nearly bankrupt with an acute foreign currency crisis that resulted in a foreign debt default. The country announced last month that it is suspending nearly $ 7 billion in foreign debt repayment due for this year out of about $25 billion due through 2026. Sri Lanka’s total foreign debt stands at $51 billion.

The IMF said in a statement Thursday said that a team remotely concluded initial discussions about Sri Lanka’s reform plan on Tuesday.

“The team made good progress in assessing the economic situation and in identifying policy priorities to be taken going forward,” the statement said.

“We expect that these discussions will help the authorities formulate their reform program,” the IMF said.

Sri Lanka’s former finance minister Ali Sabry has said that badly timed tax cuts led to a reduction in government revenue, reducing the country’s ability to borrow and releasing existing reserves to maintain the US dollar at a fixed rate against the local currency — and that those factors triggered the foreign currency crisis. Also, the COVID-19 pandemic nearly severely reduced tourism revenue, one of the country’s economic lifelines.

The economic crisis has caused a reduction in imports of goods and industrial raw materials, prompting an acute shortage of essential items like food, medicine, cooking gas and other fuel, toilet paper and even matches.

Sri Lankans for months has been forced to wait in lines lasting hours outside stores to buy fuel and cooking gas.

Protesters have occupied the entrance to President Gotabaya Rajapaksa’s office for nearly 50 days, demanding his resignation because they blame him and his powerful, and politically connected family for the economic crises.

The protests have nearly dismantled the powerful Rajapaksa political dynasty after the president’s brother resigned as prime minister amid countrywide violence earlier this month when his supporters attacked peaceful protesters. Two of the president’s other siblings and nephew resigned from their Cabinet posts.

Lanka sends 2 ministers to Russia for oil amid crisis