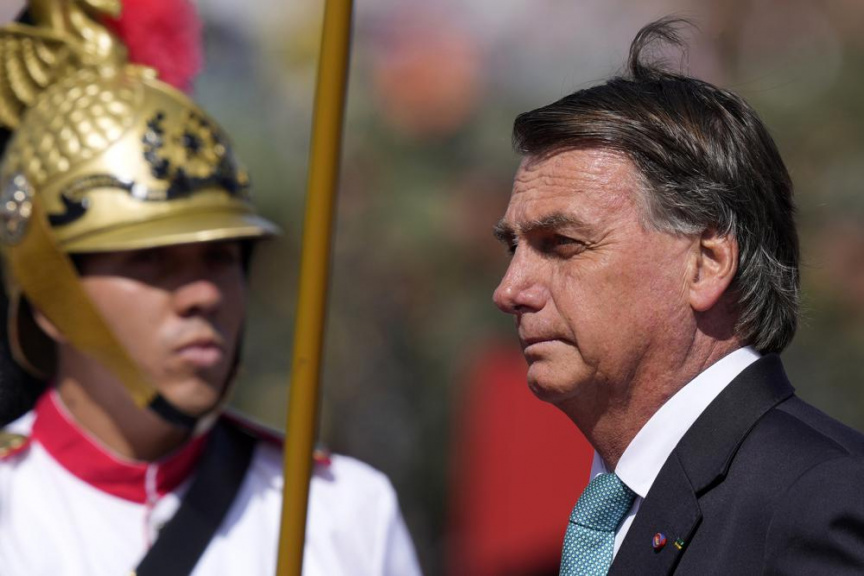 RIO DE JANEIRO (AP) — Brazil’s far-right President Jair Bolsonaro has signed a decree that he says will create a national carbon market to reduce greenhouse gas emissions. Brazil ranks sixth in the world for climate pollution, according to Climate Watch .

“In this still new green economy market, Brazil emerges as a powerhouse,” Bolsonaro said to a crowd of businesspeople during a government-sponsored Global Carbon Market Congress Thursday night in Rio de Janeiro that was webcast but closed to the press.

But critics say the measure is too vague and fails to address the biggest climate issue in Brazil — explosive deforestation in the Amazon rainforest.

Bolsonaro’s decree states that unnamed economic sectors can register their carbon footprints in a new registry and then present an emission reduction curve within 180 days. This deadline can be extended for another 180 days.

“The measure is ineffectual. It establishes a registry system but fails to set deadlines,” said Gustavo Pinheiro, an advisory board member at Glasgow Financial Alliance for Net Zero. “It is a voluntary regulation, as it does not generate any obligation.”

Bolsonaro’s announcement also sidesteps a different carbon market proposal backed by some of Brazil’s industries that had been making its way through Congress.

In an actual cap and trade market system, governments set a maximum amount of pollution that companies can release. Companies that beat their target generate credits they can sell. Companies that fail their targets have to pay money to buy credits or allowances. In a voluntary market, companies agree to lower their pollution without being forced to and commit to purchase credits if they fail.

Almost half of Brazil’s climate pollution comes from deforestation, according to an annual study from the Brazilian the nonprofit network Climate Observatory. The destruction is so vast that the eastern Amazon has ceased to be a carbon sink, or absorber, for the Earth, and has converted into a carbon source, according to a study published in 2021 in the journal Nature.

Bolsonaro’s announcement was met with skepticism among participants at the global carbon market congress.

“If the high-profile issue of deforestation is not tackled effectively,” said Graham Stock, a strategist for BlueBay Asset Management, “It’s going to be difficult for Brazil to attract investment to the carbon market.”

“We believe Brazil has to bring deforestation back down to have any chance of meeting its broader commitments under the Paris Accord,” he said. At the United Nations climate conference in Glasgow last year, Brazil made further pledges to eliminate deforestation. “But that is not happening,” he said.

Brazil has committed to the world to reduce its carbon dioxide pollution by 43% from 2005 levels by 2030. Instead Brazil’s greenhouse gas emissions in 2020 grew by 9.5%, while worldwide, they dropped by almost 7%, according to Climate Observatory. Meanwhile deforestation in the Amazon rose 22% last year, according to official monitoring. Stock pointed out that prosecutions for environmental crimes are also falling, a fact celebrated as an achievement by the Bolsonaro administration.

Stock is also co-chair of The Investors Policy Dialogue on Deforestation, a group that has been engaging with authorities in Brazil and Indonesia to halt deforestation. It claims to have a membership of 58 financial institutions from 18 countries, with approximately U.S. $8.5 trillion in assets under management.

In an actual voluntary carbon market, verification is crucial. Companies that wish to generate carbon credits must hire independent third party verifiers who attest that but for the creation of the credit, carbon pollution would have been released. The credit is a solemn promise that pollution has been avoided. Otherwise the credits are bogus and do nothing to address climate change.

“Here is a reality check for us,” said Roberto Campos Neto, Brazil’s Central Bank President, sitting next to Stock. “We can think that we are doing well, but if the investors’ perception is not in line with what is needed for investments to arrive, then we will have failed.”