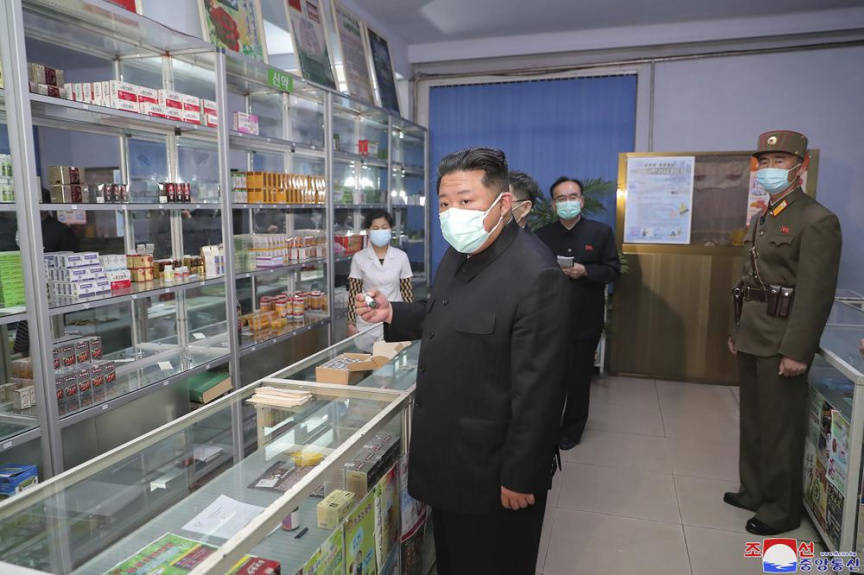 More than 564,860 people are in quarantine due to the fever that has rapidly spread among people in and around the capital, Pyongyang, since late April. Eight more deaths and 392,920 newly detected fevers were reported Monday, the North’s emergency anti-virus headquarters said.

State media didn’t specify how many were confirmed as COVID-19, but North Korea is believed to lack sufficient testing supplies to confirm coronavirus infections in large numbers and is mostly relying on isolating people with symptoms at shelters.

Failing to slow the virus could have dire consequences for North Korea, considering its broken health care system and that its 26 million people are believed to be unvaccinated, with malnourishment and other conditions of poverty.

Kim during a ruling party Politburo meeting on Sunday criticized government and health officials over what he portrayed as a botched pandemic response, saying medicine supplies aren’t being distributed to pharmacies in time because of their “irresponsible work attitude” and lack of organization, the North’s official Korean Central News Agency said.

The Politburo had issued an emergency order to immediately release and quickly distribute state medicine reserves and for pharmacies to open for 24-hour shifts, but Kim said such steps weren’t being properly implemented. Kim ordered the medical units of his military to get involved in stabilizing the supply of medicine in Pyongyang, KCNA said.

Kim and Politburo members after the meeting made on-site inspections of pharmacies in a district in Pyongyang, where Kim lamented that most of the shops were in poor condition and lacked storage spaces and criticized some pharmacists for not wearing proper white gowns.

North Korea acknowledged a COVID-19 outbreak for the first time last Thursday, saying an unspecified number of people had tested positive for the omicron variant. It instituted a lockdown and Kim ordered public health officials, teachers and others to identify people with fevers so they could be quarantined.

North Korea’s claim of a perfect record in keeping out the virus for 2 1/2 years was widely doubted. But its extremely strict border closure, large-scale quarantines and propaganda that stressed anti-virus controls as a matter of “national existence” may have staved off a huge outbreak until now.

It’s not clear if North Korea’s urgent messaging about its outbreak indicates a willingness to receive outside help.

South Korea’s President Yoon Suk Yeol said in Parliament on Monday that the South was willing to send vaccines, medicine, equipment and health personnel to the North if it’s willing to accept. South Korean officials say Pyongyang so far has made no request for Seoul’s help.

Inter-Korean relations have deteriorated since 2019 after the larger negotiations between the U.S. and North Korea collapsed over disagreements involving the North’s nuclear arsenal and U.S.-led sanctions.

Kim has previously praised China’s pandemic response and urged his officials to learn from it, which may indicate North Korea is more willing to accept help from its major ally. Chinese officials said last week that Beijing was ready to offer help but they had no information about any such request being made.

Even as he called for a lockdown of cities and counties to slow the spread of COVID-19, Kim also stressed the country’s economic goals should be met, which likely means huge groups will continue to gather at agricultural, industrial and construction sites.

While accelerating his missile tests in brinkmanship aimed at pressuring Washington for economic and security concessions, Kim has been grappling with domestic challenges and a pandemic-shocked economy, pushing him to perhaps the toughest moment of his decade in power.

State media in recent weeks have emphasized farming campaigns to protect crops amid a drought during rice-planting season, a worrisome development in a country with chronic food shortages. Kim is also intent on achieving his stated goals in a five-year national development plan announced in early 2021 after he showed unusual candor by acknowledging that his previous economic plans weren’t working.