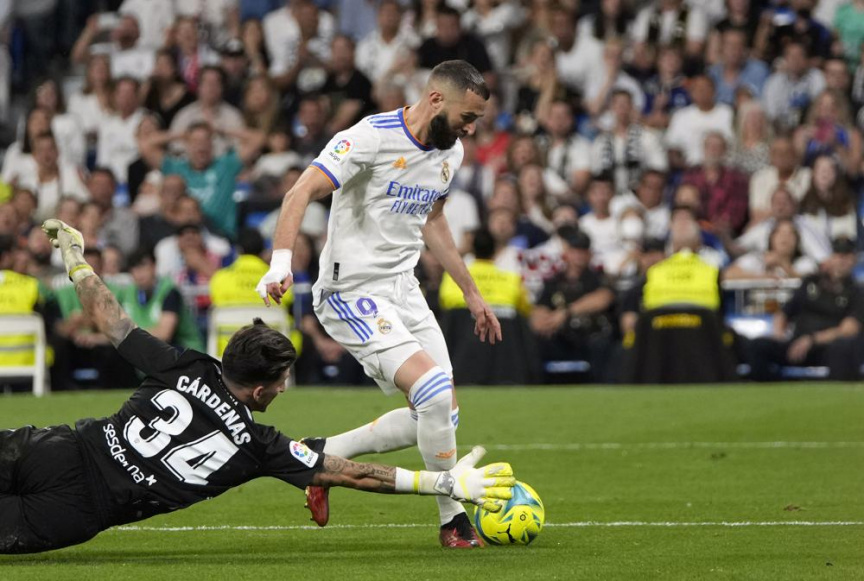 Levante's goalkeeper Dani Cardenas, left, makes a save in front of Real Madrid's Karim Benzema during a Spanish La Liga soccer match between Real Madrid and Levante at the Santiago Bernabeu stadium in Madrid, Thursday, May 12, 2022. (AP Photo/Manu Fernandez)

Benzema netted in the first half of the team’s 6-0 rout of last-place Levante in the Spanish league, with Madrid having secured the title a few rounds ago.

The result sealed Levante’s relegation after five consecutive years in the first division.

Vinícius Júnior, Benzema’s trusted attacking partner all season, scored a hat trick for Madrid as it continues to prepare for the Champions League final against Liverpool in Paris on May 28, when it will try to win a record-extending 14th European title.

Benzema’s close-range header in the 19th minute off a cross by Vinícius gave the French striker his league-leading 27th goal, which is nine better than any other player in the competition this season. He has scored more than a third of Madrid’s 79 league goals so far.

It was the 20th goal in the last 15 matches in all competitions for Benzema, who has been key in the team’s run to the Champions League final, scoring decisive goals in every knockout round of the European tournament — including two hat tricks.

He could have added another goal on Thursday but unselfishly fed Vinícius the ball for the team’s fifth after clearing the goalkeeper inside the area.

“The connection with Benzema has been very good all season long,” said Vinícius, who now is the league’s third-best scorer with 17 goals. “Karim has had a great season and hopefully he can finish it by winning the Ballon d’Or (award for best player).”

Vinícius had netted his first goal in the first half before closing the scoring in the final minutes for his maiden hat trick with Madrid. Ferland Mendy and Rodrygo scored their goals before halftime.

Benzema was replaced in the 75th along with Luka Modric, who set up three of Madrid’s goals.

Benzema, Modric, Mendy, Vinícius and goalkeeper Thibaut Courtois had not started in the league derby against city rival Atlético Madrid on Sunday, a game Atlético won 1-0 at home.

Atlético did not give Madrid a guard of honor for the league champions at the Wanda Metropolitano Stadium, but Levante’s players did on Thursday, lining up by the sideline and applauding Madrid’s players as they entered the field at the Santiago Bernabéu Stadium.

Valencia-based Levante was in the first division in 14 of the last 18 seasons.

“Unfortunately we were not up to the task this season,” Levante captain José Luis Morales said, amid tears. “We have to apologize and try to put this club back where it deserves next season.”

Real Sociedad defeated Cádiz 3-0 to guarantee a place in a European competition for the third straight season.

Alexander Sorloth, Adnan Januzaj and Portu scored a goal each for the Basque Country club, which will play in either the second-tier Europa League of the third-tier Conference League.

Sociedad is in sixth place, two points behind Real Betis and three points ahead of Villarreal. Betis has already secured a Europa League place by winning the Copa del Rey, so the second Spanish berth in the competition will go to either Sociedad, Villarreal or Athletic Bilbao.

The victory ended Sociedad’s four-game winless streak in the league.

Cádiz, which was looking for its second win in a row, saw its chances of escaping relegation diminish with the away defeat. It will go into the final two rounds two points outside the relegation zone.

Villarreal moved closer to guaranteeing its own European spot with a 5-1 rout at Rayo Vallecano.

Alfonso Pedraza scored twice and Juan Foyth, Paco Alcácer and Pau Torres added a goal each for Villarreal, which was eliminated by Liverpool in the Champions League semifinals this season.

Villarreal is four points in front of Athletic, which lost 1-0 at Granada on Tuesday.

France star Karim Benzema out for World Cup with injury

Relief for Real as Benzema has minor tendon injury

Madrid forward Benzema on trial in France for blackmail