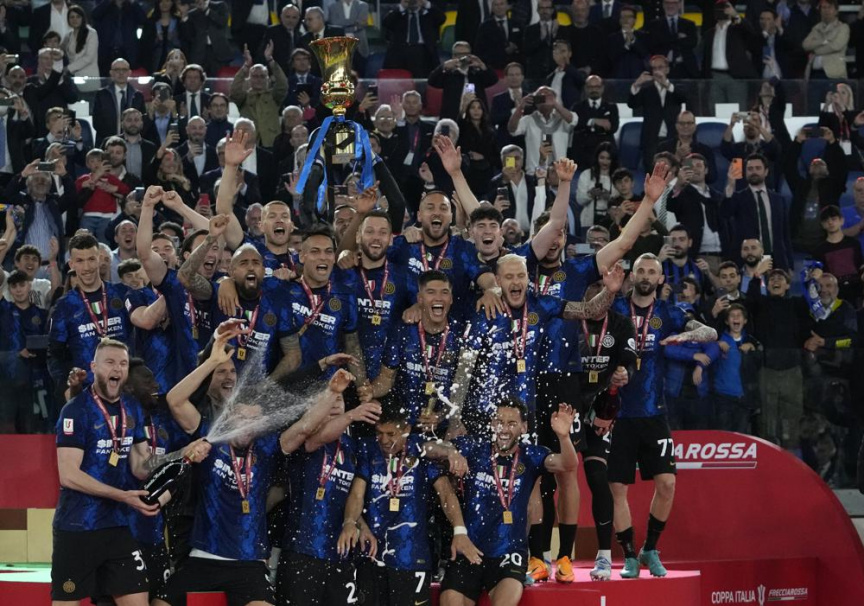 Inter players holds the trophy and celebrates after winning the the Italian Cup final soccer match between Juventus and Inter Milan at the Stadio Olimpico in Rome, Italy, Wednesday, May 11, 2022. (AP Photo/Alessandra Tarantino)

ROME (AP) — Inter Milan remained on course for a league and cup double by beating Juventus 4-2 after extra time in the Italian Cup final on Wednesday.

Juventus had turned the match around early in the second half with two goals in as many minutes from Alex Sandro and Dušan Vlahović after going behind on an early Nicolò Barella strike.

There was a sour note to Perišić’s post-match interview when the Inter winger was asked about his contract which expires at the end of the season.

“I don’t know anything yet. You don’t wait until the last minute with important players, you just don’t do it,” he said.

For Inter it was the first of what could be an impressive double as it is also tussling with city rival AC Milan at the top of the Serie A standings, although the defending champion is two points behind the Rossoneri with two matches remaining.

“I always feel like a leader and when the team is so strong it’s even easier to be a leader,” Perišić said. “We still have two matches, we need to win them and see. Do we believe we can do it? Always.”

Juventus also lost to Inter in the Italian Super Cup in January and it is the first year since 2011 it has finished the season without a trophy.

“I think Inter showed during the season they are stronger in all the matches we played against them. And we were lacking something. And I hope the anger of losing three out of four games against Inter will fire us up for next season,” said Juventus captain Giorgio Chiellini, who confirmed he is leaving at the end of the season.

“I’m sad to be going after a year without a trophy, but after 10 years I think it can be accepted. But that should stay with us for the next few years.

It was looking for a record-extending 15th Italian Cup and had won five of the past seven editions, including last year’s.

But it was Inter that got off to the perfect start at the Stadio Olimpico in Rome as it took the lead with less than seven minutes on the clock. Barella was given too much time and space by the Juventus defenders and he cut in from the left before curling into the top far corner.

Juventus started to get into the match midway through the first half and almost levelled but first Samir Handanović made a comfortable save to deny Paulo Dybala and then did even better to palm away a great effort from Vlahović.

However, Handanović was somewhat at fault for Juve’s equalizer five minutes after the break. A shot from Vlahović was charged down but it came out to Alex Sandro on the edge of the area and his effort squirmed out of the Inter goalkeeper’s hands and into the back of the net.

Juventus turned the match around completely two minutes later when Vlahović ran onto a through-ball and into the area and feinted his way past Inter defender Danilo D’Ambrosio. His initial shot came off Handanović’s face but he slotted home the rebound.

Inter increased the pressure and managed to level through a controversial penalty as Lautaro Martínez went down on what referee Paolo Valeri adjudged to have been a foul from Leonardo Bonucci, although it appeared as if Martínez hooked his leg between the Juventus defenders.

Hakan Çalhanoğlu smashed an unstoppable penalty into the roof of the net, sparking a spat on the sidelines shortly after as Juventus coach Massimiliano Allegri got into an argument with an Inter assistant.

Inter was awarded another penalty early in extra time after Matthijs de Ligt barged into Stefan de Vrij and – with Çalhanoğlu having been substituted – Perišić stepped up and drove an equally powerful spot-kick into the top left corner.

Inter all but sealed the match three minutes later when Perišić controlled a pass on the edge of the area and fired into the top right corner.

Allegri was sent off shortly afterwards.

China cites pandemic and withdraws as host of 2023 Asia