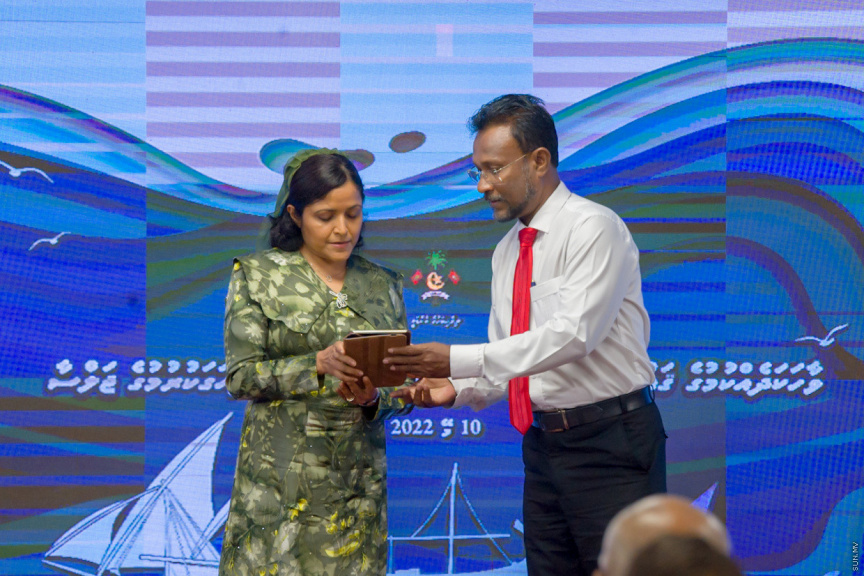 The mobile dictionary application was launched during a special ceremony held to commence the 35th National Oratory Competition, by the Minister of Arts, Culture and Heritage of Maldives Yumna Maumoon.

Commenting on the application, Minister Yumna said that the application will aid in the work done to strengthen Dhivehi language’s relationship with technology and progress the language to next level.

Additionally, Minister Yumna said that a new update would be coming to the application very soon and added that this would reflect the work done to take Dhivehi language to the next stage.

Also speaking at the gathering, the President of Dhivehi Language Academy Dr. Ashraf Abdul Raheem said that the application boasts 36,637 words, with over 53,000 meanings.

Furthermore, Dr. Ashraf said that 235,000 words and meanings were amended in the application.

“Every human will make mistakes. So if any error is noticed, please share it with us. We will look into it,” he went on to say.

Maldives Computer Society's President Ahmed Nadeem who designed the application revealed to Sun that the design process was distributed to two states. He noted that the application launched was the first stage of this.

Detailing the features of the application, Nadeem said that it would feature daily “word of the day” as well as “idiom of the day”. Moreover, Dhivehi-English translation for a word would feature on the daily as well.

“There will still be words not included in the application. Those can be sent to the academy via the application, and after a week or two for the review process, the word will be added.”

In addition to this, through the application, people can share their opinions regarding the new words created by the “Bas Committee”.

Nadeem said that they were working to release the new update of the application as part of the second stage within the next two-three months. He added that it would feature different words used in different parts of Maldives with the same meaning.

“The second update will have an advance search application. For instance, search results for a word would include which region, and how it is used.”