Barcelona wins after Araújo taken off the field in ambulance 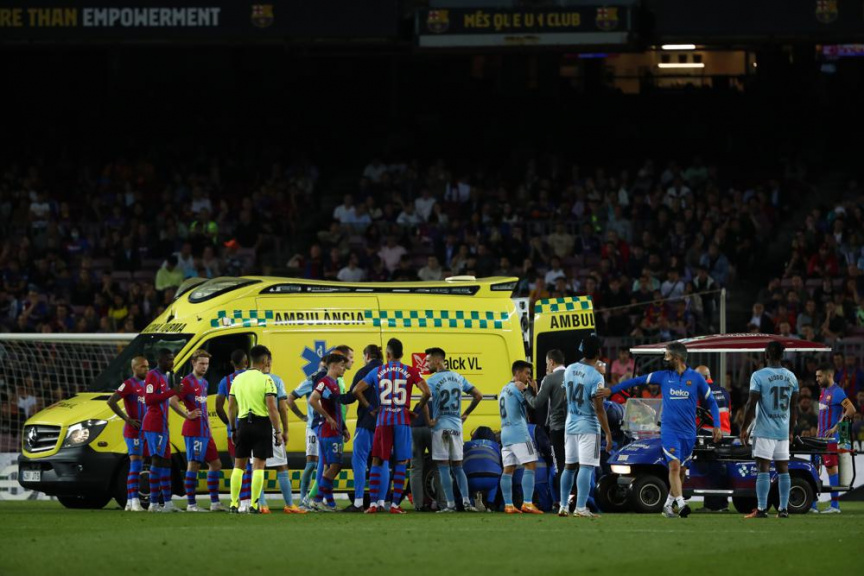 Barcelona's Ronald Araujo is carried by an ambulance after an injury during the Spanish La Liga soccer match between FC Barcelona and Celta Vigo at the Camp Nou stadium in Barcelona, Spain, Tuesday, May 10, 2022. (AP Photo/Joan Monfort)

MADRID (AP) — Barcelona moved a step closer to securing second place in the Spanish league by defeating 10-man Celta Vigo 3-1 on Tuesday despite defender Ronald Araújo leaving the field in an ambulance with a head injury after colliding with a teammate.

Barcelona said Araújo “has suffered a concussion and has been taken to the hospital to undergo further testing” after he and Gavi Páez hit their heads while going for a ball near midfield in the 61st minute at the Camp Nou Stadium. The Uruguay defender seemed OK at first but collapsed after taking a few steps.

“It’s scary when something like this happens,” said forward Pierre-Emerick Aubameyang, who scored twice for Barcelona.

The game was interrupted for nearly eight minutes as Araújo received medical assistance and the ambulance was brought onto the field to transport him to the hospital.

“It looked bad at first, with him being put on a stretcher,” Celta striker Iago Aspas said. “After a while they said he was doing better.”

Memphis Depay put Barcelona ahead in the 30th and Aubameyang added to the lead in the 41st and 48th minutes. Aspas pulled the visitors closer in the 50th. The goal came after Araújo misplayed a pass by goalkeeper Marc-André ter Stegen, allowing the ball to be stolen by Celta.

Celta defender Jeison Murillo was sent off in the 58th for a foul to stop a Barcelona breakaway.

The victory left Barcelona seven points in front of Sevilla ahead of the rival’s home match against relegation-threatened Mallorca on Wednesday. The Catalan club was eight points ahead of fourth-place Atlético Madrid, which visits Elche on Wednesday.

Finishing second is important because it guarantees a place in the lucrative Spanish Super Cup in Saudi Arabia.

There will be two rounds left after the mid-week games are completed.

Real Madrid, which hosts Levante on Thursday, clinched the title two rounds ago.

Real Betis defeated Valencia 3-0 to end a four-match winless streak and keep alive its hopes of qualifying for the Champions League next season.

It was a rematch of the Copa del Rey final won by Betis in a penalty shootout last month.

Willian José, Sergio Canales and Borja Iglesias scored a goal each in the second half to move fifth-place Betis within three points of Atlético and four of city rival Sevilla.

Manuel Pellegrini’s Betis had been near the top most of the season but lost ground recently as it focused on the final stages of the Copa del Rey. It was coming off two losses and two draws in its last four league matches, including a 2-1 home defeat against Barcelona after conceding four minutes into stoppage time.

Betis last played in the Champions League in 2005-06, after it finished fourth in the Spanish league. It ended sixth in the league in two of the last four seasons, with its lone title coming in 1934-35.

“While there is still a mathematical chance, we have to keep believing,” Pellegrini said. “All we can do is win our last two matches, even though we know it will be difficult for the other teams to lose points.”

Granada defeated mid-table Athletic Bilbao 1-0 to move five points from the relegation zone ahead of the other mid-week games.

Álex Collado scored a 35th-minute winner for 16th-place Granada, which was coming off a 6-2 victory at 18th-place Mallorca.

Granada is unbeaten in four matches, since a 4-1 home loss to Levante in April.

Eighth-place Athletic played a man down from the 85th after Mikel Vesga was sent off with a second yellow card.