Havana hotel death toll at 31 as dogs search for survivors 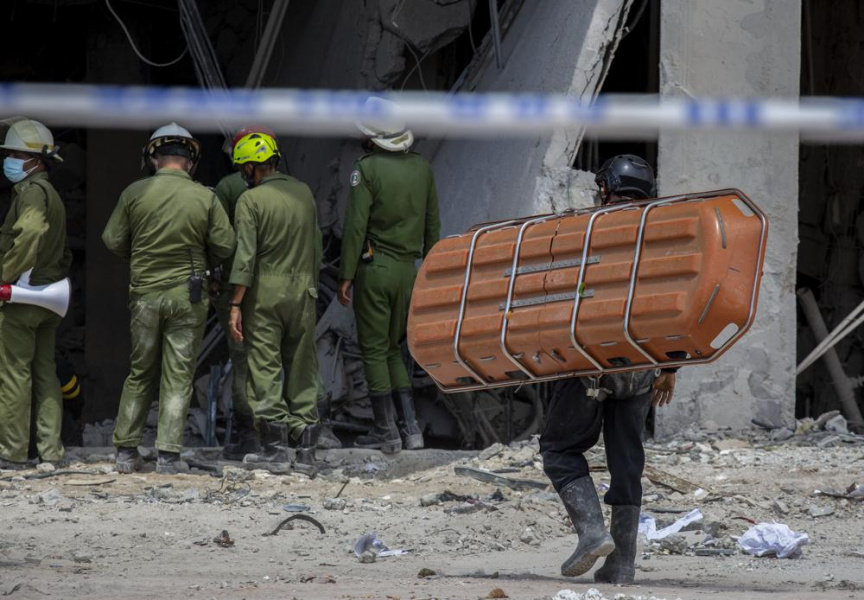 A member of the rescue team carries a stretcher to transport the body of a deceased person found in the rubble after a deadly explosion that destroyed the five-star Hotel Saratoga in Old Havana, Cuba, Sunday, May 8, 2022. (AP Photo/Ismael Francisco)

HAVANA (AP) — The death toll of a powerful explosion at a luxury hotel in Cuba’s capital increased to 31 Sunday evening as search crews with dogs hunted through the rubble of the iconic, 19th century building looking for people still missing.

The Hotel Saratoga, a five-star 96-room hotel in Old Havana, was preparing to reopen after being closed for two years when an apparent gas leak ignited, blowing the outer walls into the busy, midmorning streets just a block from the country’s Capitol building on Friday.

Several nearby structures also were damaged, including the historic Marti Theater and the Calvary Baptist Church, headquarters for the denomination in western Cuba. The church said on its Facebook page that the building suffered “significant structural damage, with several collapsed or cracked walls and columns (and) the ceiling partially collapsed,” though no church workers were hurt.

In releasing the names of those who were killed, the Health Ministry said the dead included four minors, a pregnant woman and a Spanish tourist, whose companion was seriously injured.

The ministry also said 54 people were injured, with 24 hospitalized. It previously reported 85 injured, but that tally turned out to include those killed by the explosion.

Nineteen families had reported people missing as of Saturday evening, but authorities did not say Sunday whether the number had changed.

Authorities said the cause of the explosion at the hotel owned by Grupo de Turismo Gaviota SA was still under investigation, but believed it to have been caused by a gas leak. A large crane hoisted a charred gas tanker out of the rubble Saturday.

Burials for victims had begun, municipal authorities said, while some people still waited for news of missing friends and relatives.

“We are hoping that something will be known about my cousin’s mother,” Angela Acosta told The Associated Press near the site of the explosion. Her relative, María de la Concepción Alard, lived in an apartment adjacent to the hotel with a black Labrador, which was rescued along with another dog Sunday.

Crews have worked to clean up streets around the hotel and by late Saturday, substantial pedestrian traffic had resumed.

“There are mothers who are without their children today,” Matha Verde, a manicurist who was walking near the Saratoga, said Sunday, when Mother’s Day was celebrated in Cuba. She said she tells women who lost their sons or daughters in the explosion that they “have to keep going.”

The explosion added to the woes of a crucial tourism industry that had been stifled by the coronavirus pandemic as well as tightened sanctions imposed by former U.S. President Donald Trump and kept in place the Biden administration. Those limited visits by U.S. tourists to the islands and restricted remittances from Cubans in the U.S. to their families in Cuba.

Tourism had started to revive somewhat early this year, but the war in Ukraine deflated a boom of Russian visitors, who accounted for almost a third of the tourists arriving in Cuba last year.

The Saratoga, which had been closed through the pandemic, was one of the elite lodgings in Havana, often hosting visiting VIPs and celebrities. Its owner is one of the Cuban military’s businesses.

Some attention in Cuba began to shift to an official visit by Mexican President Andrés Manuel López Obrador, who arrived Saturday night at the end of a five-country tour that began in Central America.

López Obrador met Sunday with Cuban President Miguel Díaz-Canel, who awarded him the Order of Jose Marti “for his great achievements for humanity.” It is the most important award the country gives to a foreigner.

Díaz-Canel’s office stated in a tweet that López Obrador said he would insist to U.S. President Joe Biden that Cuba not be excluded from the Summit of the Americas it will host in Los Angeles in June.

López Obrador said the objectives of the trip included signing agreements on trade, health, education and cooperation with the island, while he ratified his foreign policy stance.

“We are not in favor of hegemonies,” he said. “Let no one exclude anyone because we are independent countries, we are sovereign countries, and no one can place themselves above the rights of peoples and nations.”

Díaz-Canel visited Mexico during its independence day celebrations last year. López Obrador has recently spoken out against the apparent U.S. government intention of to exclude Cuba, Venezuela and Nicaragua from the upcoming summit.

Total blackout in Cuba after hurricane

Less diesel to Cuba drivers as fuel used to electricity

More than 60 feared dead in bombing of Ukrainian school