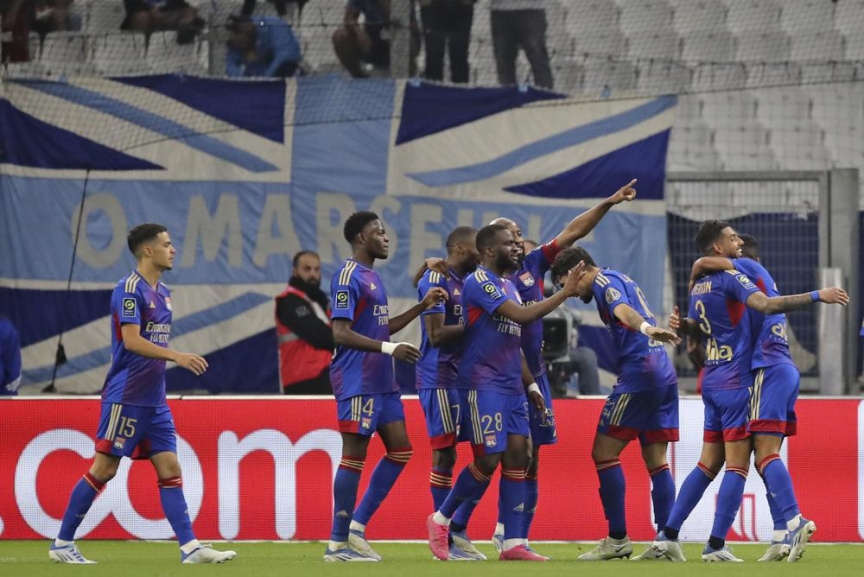 PARIS (AP) — A wasteful Marseille saw its lead in the race for second place shrink to three points after losing to Lyon 3-0 in the French league on Sunday.

The top two French clubs enter the group stage of the Champions League while the third-place team goes to the third qualifying round of the lucrative European competition.

Marseille should have taken the lead in the first half, but Arkadiusz Milik failed to convert two big chances for the hosts. Dimitri Payet sent a volleyed pass to Milik, the Poland forward, who sent his lob over the bar in the 29th minute. Milik met a low cross from Gerson in the 43rd only to shoot wide with the goal at his mercy.

“It’s important to clear our heads now,” Marseille president Pablo Longoria told Amazon Prime Video. “We must turn the page and take responsibility for the mistakes that we’ve made.”

Lyon proved more clinical by scoring with its first chance in the 55th. Moussa Dembele connected with a free kick from Emerson and was denied by Marseille goalkeeper Pau Lopez, but Castello Lukeba followed up to grab the opener.

Dembele doubled the lead in the 76th by heading in Malo Gusto’s cross to notch his 17th league goal.

Monaco stretched its winning run to seven games to pull within three points of Marseille by downing Angers 2-0.

Monaco took the lead in the 42nd with an own-goal from Angers wingback Abdoulaye Bamba. France international Wissam Ben Yedder capitalized on a counterattack in the 61st to notch his 21st league goal, just three behind league top scorer Kylian Mbappe.

Monaco stayed fourth, level on points with Rennes, which has a much better goal difference.

Nice secured a 1-0 win at Bordeaux to remain fifth, two points off the Europa League spot. Andy Delort pounced on a loose ball to score a poacher’s goal in the 74th.

Nice will also have a chance of getting a European spot when it faces Nantes in the French Cup final next weekend.

Bottom side Metz hurt its chances of survival by drawing with Montpellier 2-2. Metz took a 2-0 lead with goals from Thomas Delaine in the 24th and Louis Mafouta in the 70th. But Montpellier wing back Arnaud Souquet pulled one back in the 80th before teenage striker Elye Wahi equalized in stoppage time.

“That reflects our season,” Mafouta told Amazon Prime Video. “We concede two goals in the last 10 minutes. Usually, that’s when we must be strong mentally. Unfortunately, we cracked today. Very disappointed.”

Metz extended its winless streak to 14 games and is six points off the relegation playoff spot.

Midtable Lille had its European hopes dashed when it conceded three penalties and had Portugal midfielder Renato Sanches and Turkey forward Burak Yilmaz sent off in a 3-0 defeat at Troyes.

Reims mathematically secured safety by edging lowly Lorient 2-1. Arber Zeneli put Reims ahead in the 17th. Nigeria international Terem Moffi leveled in the 32nd by scoring a solo goal after a run from his own half to skip past three defenders and dribble past the goalkeeper before slotting into an empty net. Mali international El Bilal Toure scored the winner in the 59th.

AC Milan on track to win Serie A after blunder