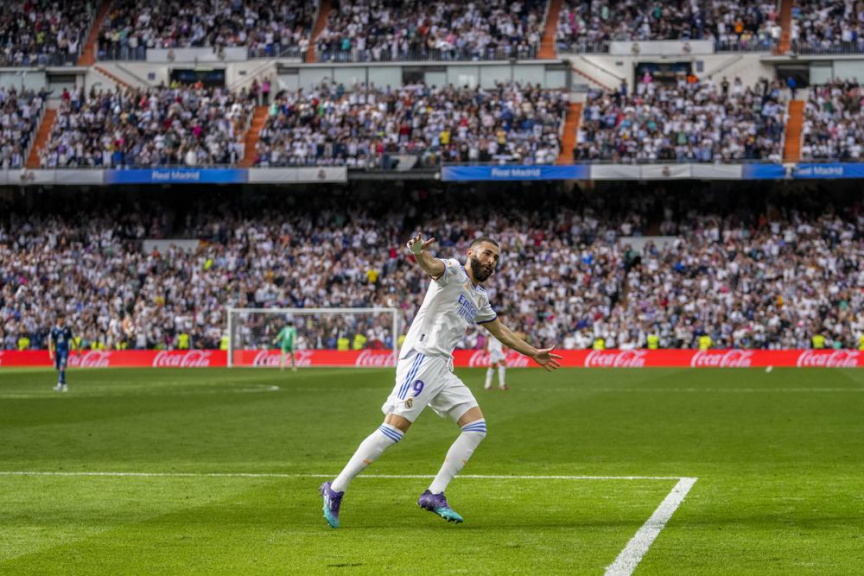 MADRID (AP) — Real Madrid made it look easy this time.

With a title-winning campaign few could contest, Madrid clinched its record-extending 35th Spanish league title on Saturday, lifting the trophy with four rounds left after routing Espanyol 4-0 with its backup players.

Led by a red-hot Karim Benzema, Madrid was in control from the start, successfully fending off every run made by its challengers and comfortably winning its second league title in three seasons.

“We were very consistent throughout the season,” coach Carlo Ancelotti said. “We faltered in very few matches.”

Barcelona thought it could have had a chance to catch Madrid after improving late in the season, but it never came close. Sevilla was near the top for a period but could not keep up, eventually seeing its chances disappear after a demoralizing 3-2 loss to Madrid at home after leading 2-0 at halftime a few rounds ago. Defending champion Atlético Madrid got off to a slow start and never had enough momentum to contend.

Madrid led in all but six rounds early in the season, being at the top since the 14th round in November.

It was Madrid’s third league title in the last six seasons, one more than Barcelona and two more than Atlético in that period. Before that, Barcelona had won six titles in eight seasons, with Madrid one and Atlético another.

Here’s a look at some of the reasons Madrid won the Spanish league:

Benzema didn’t start Saturday as Ancelotti rested most regular starters ahead of the Champions League semifinal against Manchester City on Wednesday, but the French striker needed only a few minutes off the bench to score his league-leading 26th goal.

He has 11 more than his closest challengers, and his total tally for the season is at 42 goals from 42 appearances in what has been his best campaign ever.

Benzema had a perfect partner in attack as Vinícius Júnior also had a breakout season, finally becoming an effective goal-scorer.

The Brazilian found the net 14 times, and with Benzema scored more than half of the team’s 73 goals. That leaves Madrid with the league’s best offense, with 12 goals more than Barcelona.

The other Madrid player with most goals is Marco Asensio, with 10.

Saturday’s title made Ancelotti the first coach to win all five top leagues, and his experience was key to keep Madrid from steering off track when things got difficult.

He managed the squad well and it reached the decisive stages of the season in good form. Ancelotti had been criticized for not rotating his players enough in his first stint at the club from 2013-15, when he failed to win the league.

He said the international breaks were turning points for the squad this season, especially the one after Madrid lost 4-0 to Barcelona at home.

Madrid won all of its five league matches after that “clásico” loss at the Santiago Bernabéu Stadium.

It won both of its matches against Sevilla, and the first against Atlético. The second will be next week at the rival’s Wanda Metropolitano Stadium.

“We made a huge effort this year,” goalkeeper Thibaut Courtois said. “We were consistent and did well in key games. We came out of difficult games and that’s why we are champions.”

NO RAMOS NO PROBLEM

There were doubts about Madrid’s defense when Sergio Ramos left to join Paris Saint-Germain last season, but the team did just fine without the veteran captain.

David Alaba and Éder Militão handled the pressure well in the middle of the defense and Madrid conceded only 29 goals so far, one more than Sevilla’s league-best defense.

As usual, Courtois was solid in goal all season long, and the defense was well protected by a midfield that included veterans Casemiro, Toni Kroos and Luka Modric.

“It’s always special to win the league,” Modric said. “It’s the first time we’ve won it four games before the end of the season. That says a lot, we’ve had a spectacular season.”

Madrid cruised to the title despite not counting on some important players like Gareth Bale and Eden Hazard, who were injured during lengthy periods of the season.

Bale, often criticized by Madrid fans for his lack of effort, didn’t even make it to the title celebrations on Saturday, blaming his absence at the Bernabéu on a back spasm.