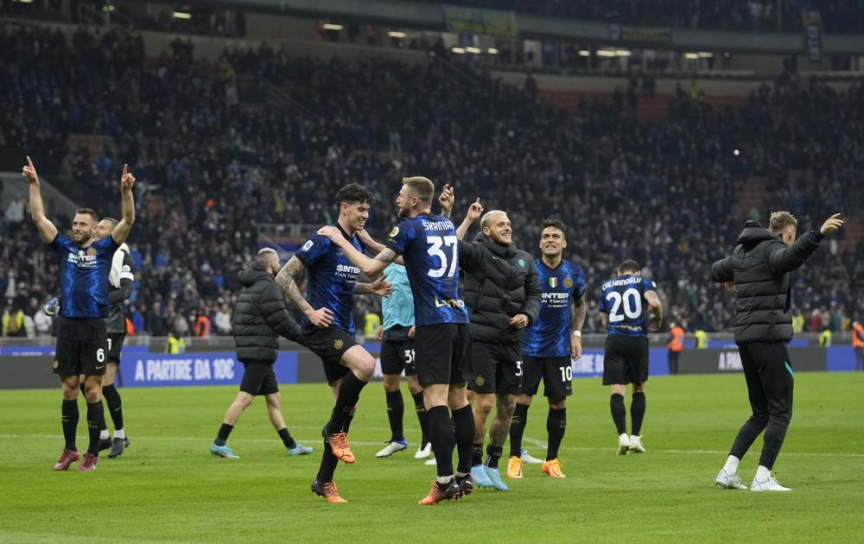 Inter Milan players celebrate their victory after the Serie A soccer match between Inter Milan and Roma at the San Siro Stadium, in Milan, Italy, Saturday, April 23, 2022. (AP Photo/Antonio Calanni)

MILAN (AP) — Defending champion Inter Milan gave a signal of intent as it crushed Roma 3-1 to move on top of Serie A on a miserable return to San Siro for former coach José Mourinho on Saturday.

Inter moved a point above AC Milan, which faces a tricky trip to Lazio on Sunday.

It was the third straight match in which Inter scored three, having done so at Spezia last weekend in the league and on Tuesday in the Italian Cup semifinal against Milan.

“I was very worried about this match because we’d given so much in the derby and we were up against another great team today,” Inter coach Simone Inzaghi said. “We needed a first-rate performance and the lads were magnificent. This is a crucial win.”

It was Mourinho’s first Serie A match at Inter as an opposing coach since he left the club in 2010 after steering it to the treble of the Italian league, Cup and Champions League. Inter beat Roma 3-0 in the Italian capital in December.

The Nerrazzurri also beat Mourinho’s side 2-0 in the Italian Cup quarterfinals in February.

“I love Inter and Inter love me, but I want to win every game,” Mourinho said. “Now that we do not have to play against either Inter or Milan or Juve or Napoli again this season, then I can say that obviously I would be happy if Inter win the Scudetto.

“But before the game I want to win and I forget where I have been before. I love Inter but I love Roma and I love my job now. We get paid to win.”

Inter scored first when Dumfries ran onto a delightful through-ball from Hakan Çalhanoğlu and slotted it between the legs of the onrushing Roma goalkeeper Rui Patrício.

They doubled the lead five minutes from halftime with a splendid goal from Brozović, who cut inside and beat Chris Smalling before curling into the top right corner.

The match was all but over seven minutes after the break when Martínez was left unmarked to head in a corner from close range.

Despite the scoreline, Mourinho was still able to give a small smile and a wave when the Inter fans sang his name in the 72nd minute.

Roma pulled one back when Eldor Shomurodov cut the ball back for a fierce Mkhitaryan strike into the top right corner.

Luis Muriel scored one and set up two others as Atalanta bounced back from three straight defeats to win at relegation-threatened Venezia 3-1.

Mario Pašalić netted the opener on the stroke of halftime and Duván Zapata doubled Atalanta’s lead three minutes after the interval. Muriel got on the scoresheet in the 63rd.

Domen Črnigoj scored for Venezia late on. The home side also hit the woodwork and had a goal ruled out for offside.

Sampdoria moved eight points above the drop zone after a late goal saw it salvage a 1-1 draw at Hellas Verona. Torino beat Spezia 2-1.