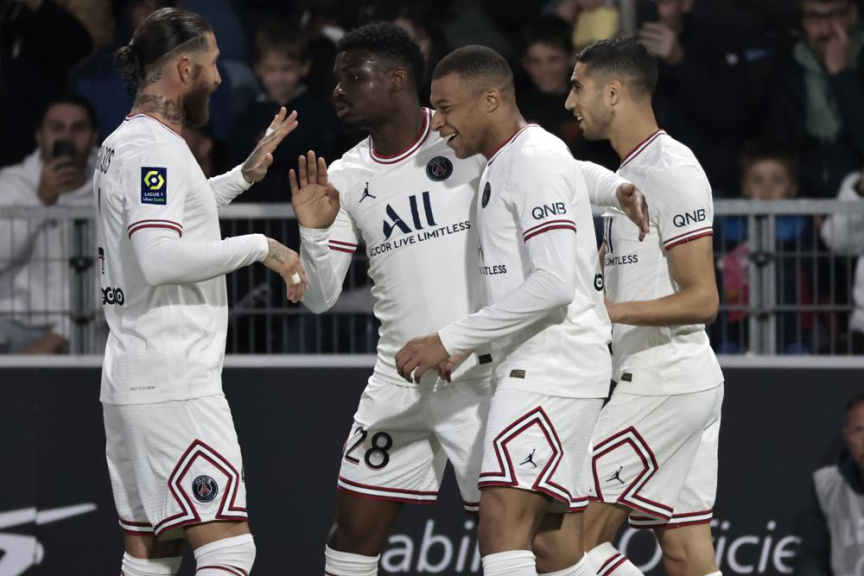 PARIS (AP) — Paris Saint-Germain all but sealed a record-equaling 10th French league crown with five rounds to spare by winning 3-0 at Angers on Wednesday.

PSG is 15 points ahead of second-place Marseille and has a vastly superior goal difference, but still still needs one point at home against Lens on Saturday to clinch the title.

PSG is set to move level with Saint-Etienne, which won its 10th title in 1981 and is fighting to stay up this season. PSG only had two titles to Marseille’s nine when cash-rich Qatari owners QSI bought PSG in 2011.

Kylian Mbappe fired PSG ahead from the edge of the penalty area in the 28th minute after swapping passes with right back Achraf Hakimi.

It looked like PSG would be able to start celebrating the title as Nantes led twice at Marseille. But Marseille rallied with Dimitri Payet netting two penalties and midfielder Amine Harit clinching a 3-2 win when he scored against his former club in the 75th.

Marseille strengthened its bid to finish second in the automatic Champions League spot as it now holds a six-point lead over Rennes and Strasbourg. Alsace-side Strasbourg beat Rennes 2-1 at home.

Mbappe’s league-leading 22 goals puts him two ahead of Rennes forward Martin Terrier, who equalized for Rennes before imposing striker Ludovic Ajorque grabbed Strasbourg’s winner as coach Julien Stephan defeated the club where he made his name.

Rennes stays third in the Champions League playoff place on goal difference ahead of fourth-place Strasbourg and fifth-place Monaco, which beat Nice 1-0 at home to leapfrog its local rival.

At Stade Velodrome, Marseille fell behind midway through the first half when Brazilian midfielder Andrei Girotto was set up by midfielder Wylan Cyprien.

Payet’s second penalty in the 55th made it 12 league goals for the former France playmaker, seven of them from the spot.

Monaco is right back in contention for third place, with Russia midfielder Aleksandr Golovin netting in first-half injury time following a cross from Brazilian Vanderson.

Match jerseys were to be auctioned to raise money for Ukrainians fleeing their country following Russia’s invasion.

Monaco is two points ahead of Nice and three ahead of seventh-place Lens, which beat Montpellier 2-0 at home to stay in the hunt for European places.

Eighth-place Lyon lost 2-1 at Brest and defending champion Lille was beaten 2-1 at Reims, which scored an injury-time winner through captain Yunis Abdelhamid.

Lille sits in ninth, one point behind seven-time champion Lyon.

Guinea striker Mohamed Bayo pounced in the 88th minute as Clermont won 1-0 at fellow struggler Troyes to move up to 17th place.

Saint-Etienne dropped to 18th — the relegation-promotion playoff position — after drawing 2-2 at 19th-place Bordeaux.

Six-time champion Bordeaux, which has conceded a league-high 79 goals, went 2-0 up inside 22 minutes through 19-year-old forward Sekou Mara and midfielder Jean Onana.

Rock-bottom Metz edged closer to relegation after losing 1-0 at Lorient, which improved to 15th thanks to Dango Outarra’s winner deep into injury time.