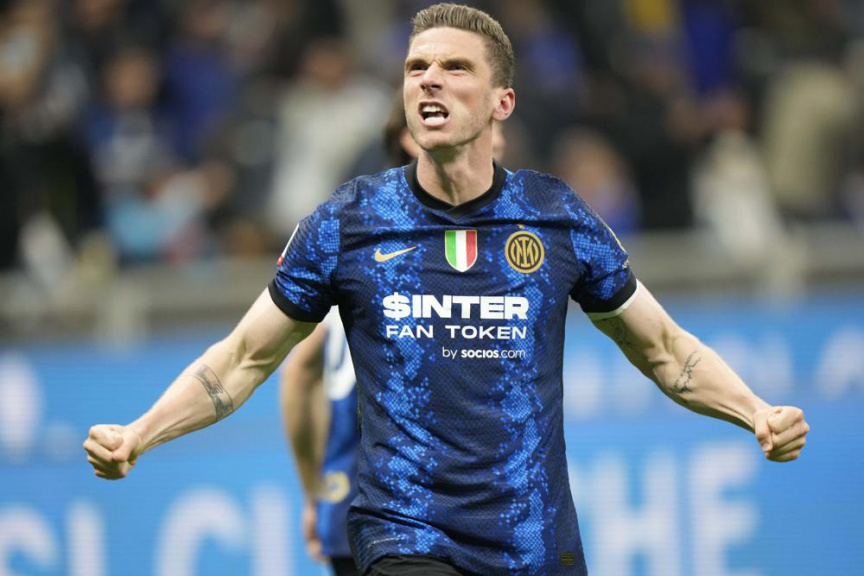 Both of Martínez’s goals came in the first half in a clinical performance that also gave Inter a 3-0 aggregate victory. Robin Gosens made sure of the team’s place in the final late on, with his first goal since his move from Atalanta in January.

Milan had a goal somewhat controversially ruled out for offside, leaving coach Stefano Pioli still fuming after the final whistle. The first-leg match between the two finished 0-0.

The Nerazzurri next face holder Juventus or Fiorentina, who meet on Wednesday with the Bianconeri leading 1-0 from the first leg. The final is scheduled for May 11.

“I’m happy because we’re through and we’ll be playing another final, we’re always working to take Inter to the top,” Martínez said.

“I always fight for this jersey, I always try to give everything I can on the field. I dreamt of being decisive: my parents, my wife and my daughter were here today … this brace is for them.”

There was a passionate atmosphere at San Siro, in the first Milan derby for more than two years with a capacity crowd. More than 76,000 fans were allowed into the stadium following the recent relaxation of some coronavirus measures in Italy.

Adding to the intensity was the fact the two teams were also involved in a tight battle for the Serie A title, with league leader Milan two points ahead of defending champion Inter.

Milan had injury problems, with Zlatan Ibrahimović among the lengthy list of absentees. Inter coach Simone Inzaghi had a full squad to choose from.

It took Inter less than four minutes to break the deadlock when Martínez volleyed in a low cross from Matteo Darmian.

However, the Rossoneri didn’t let the early goal unsettle them and had several chances to level in an enthralling first half.

Samir Handanović stuck out a leg in the 28th minute to stop an effort from Rafael Leão and the Inter goalkeeper also did well to parry a fierce volley from Alexis Saelemaekers two minutes later.

Inter winger Ivan Perišić also cleared off the line from Franck Kessié five minutes before the break but, moments later, Milan was caught napping and Martínez sprung the offside trap to run onto a Joaquín Correa through ball and double his tally.

Martínez almost completed a hat trick on the stroke of halftime but his headed flick from a corner flashed just past the far post.

Milan upped the pressure after the break but struggled to carve out real goalscoring opportunities, especially with Inter content to sit back and defend its lead.

The Rossoneri thought they had pulled one back in the 67th but, after reviewing it on the pitchside monitor, the referee adjudged that Milan defender Pierre Kalulu, who was in an offside position, had been interfering with play when Ismaël Bennacer’s shot went in.

“You can see very well that the Inter players were all protesting for handball,” a clearly irate Pioli said. “The goalkeeper conceded and didn’t protest that his view was obscured.

“The goal was definitely a good one because while Bennacer was shooting, Kalulu was moving clear of the sight line. It could have changed the match.”

Inter sealed the win eight minutes from time. Marcelo Brozović ran onto a through ball from Arturo Vidal and rolled it across for Gosens to tap in. Gosens had only been on the field for two minutes.