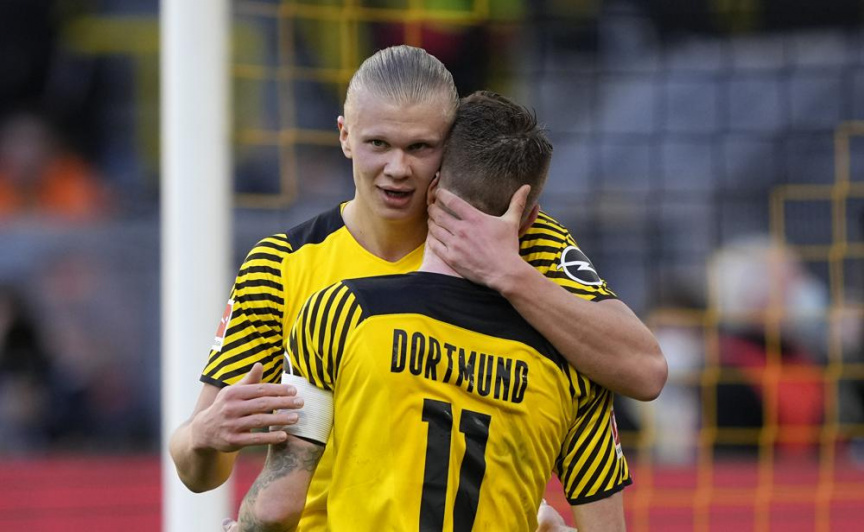 Dortmund is six points behind Bayern Munich with only a mathematical chance of the title. Six-time European champion Bayern, eliminated in the Champions League this week, can restore its nine-point lead with a win at struggling Arminia Bielefeld on Sunday.

There are only four rounds remaining after this weekend.

Dortmund took control with three goals in a five-minute spell.

Five minutes later, Emre Can netted with a shot from 20 meters that goalkeeper Koen Casteels fumbled.

Haaland grabbed his first in the 38th when he was set up by Reus and shot past Casteels. The prolific Norway star made it 6-0 in the 54th after combining well with Brandt.

Midfielder Ridle Baku got a late consolation goal for Wolfsburg, which hadn’t scored on its previous five visits to the Westfalenstadion.

Midfielders Florian Kainz and Dejan Ljubicic added on to make it 3-0 by halftime.

Hertha Berlin boosted its chances of staying up with a 1-0 win at Augsburg, thanks to an early second-half goal from Germany midfielder Suat Serdar.

Hertha was 15th and has big games coming up against relegation rivals Stuttgart and Bielefeld.

Stuttgart, which was one point behind Hertha in 16th, drew at mid-table Mainz 0-0.