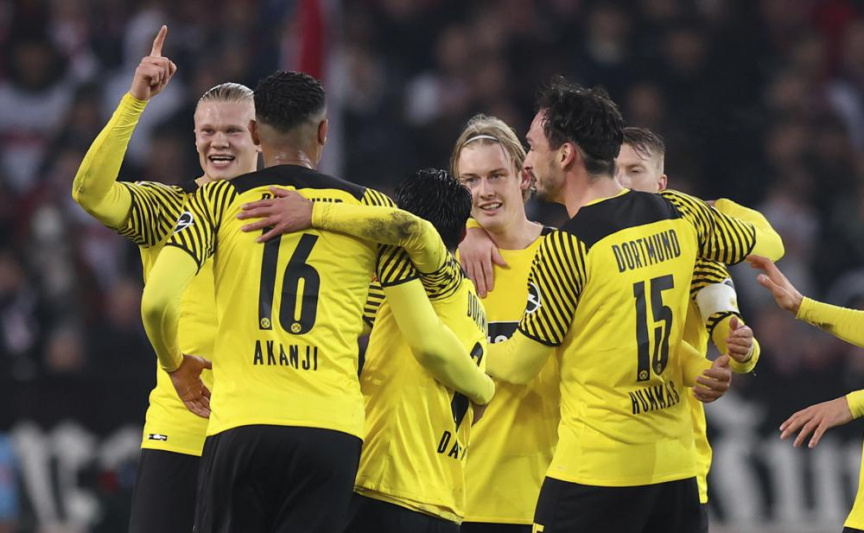 Dortmund's Julian Brandt, center, celebrates with his teammates after scoring during the German Bundesliga soccer match between Dortmund and VfB Stuttgart, at the Mercedes-Benz Arena in Stuttgart, Germany, Friday, April 8, 2022. (Tom Weller/dpa via AP)

BERLIN (AP) — Julian Brandt came on as an early substitute and scored twice in Borussia Dortmund’s 2-0 win at Stuttgart, reducing Bayern Munich’s lead at the top of the Bundesliga to six points on Friday.

Brandt was called on by coach Marco Rose to replace Giovanni Reyna in the sixth minute after the American injured his right ankle shortly after kickoff while disputing a ball with Borna Sosa.

Brandt scored his first goal in the 12th minute when he was set up by Erling Haaland, who generously squared the ball for his teammate after he was played clear by Jude Bellingham.

The Germany midfielder got his second goal in the 71st when he was given space outside the area to fire a bending strike that dipped under the arm of Stuttgart goalkeeper Florian Muller.

Sosa hit the crossbar for relegation-threatened Stuttgart with a lob from a tight angle in the final minutes.

Haaland, who has 16 league goals this season, was unable to find the net for a fifth straight league game.

Bayern will host Augsburg on Saturday in a Bavarian derby. After that, the defending German champion will focus on overturning a 1-0 loss to Villarreal in the return leg of their Champions League quarterfinal match next week.