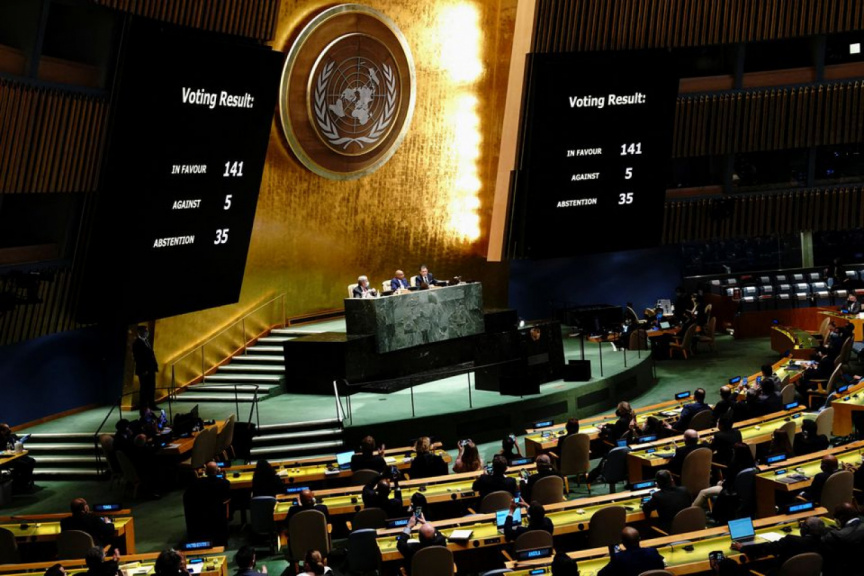 Maldives on neutral grounds in vote cast in the vote to suspend Russia from the United Nations Human Rights Council.

During the meeting of the UN general assembly held on Thursday, with 93 members voting in favour, Russia was suspended from the council for its ongoing invasion of Ukraine.

While the majority voted to suspend Russia, 24 votes were cases against this and 58 countries, including Maldives abstained.

Of the countries in this region, Afghanistan did not take part in the voting. Meanwhile, along with Maldives, India, Sri Lanka, Pakistan, Nepal and Bhutan abstained as well.

Countries like China, Iran and Syria voted against the resolution.

This marks the first instance a permanent member of the UN Security Council had its membership revoked from any of the UN bodies.

Welcoming the decision, Ukrainian Foreign Minister Dmytro Kuleba said on Twitter that war criminals have no place in UN bodies aimed to protect human rights. He also expressed gratitude to all the member states that supported the UNGA resolution and “chose the right side of the history.”

Spokesperson of KremlinDmitry Peskov said in an interview with Britain's Sky News, “We’re sorry about that,”

He further said that “And we’ll continue to defend our interests using every possible legal means.”

Security Council to hear claim of US labs in Ukraine