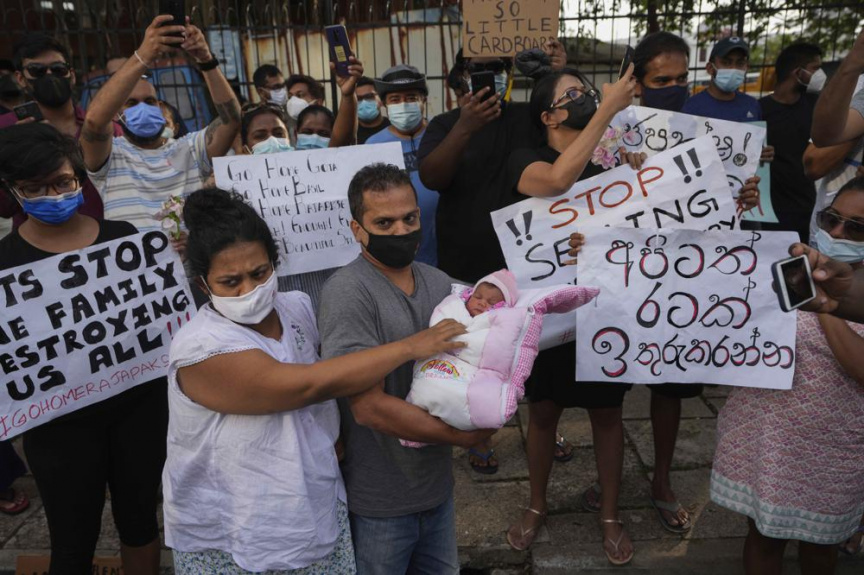 A Sri Lankan couple with their infant join an anti government protest during a curfew in Colombo, Sri Lanka, Sunday, April 3, 2022. Opposition lawmakers and people angered by the government's handling of Sri Lanka's worst economic crisis on Sunday marched to denounce the president's move to impose a nationwide curfew and state of emergency, as protests over food and fuel shortages swelled. (AP Photo/Eranga Jayawardena)

Police fired tear gas and water cannons at hundreds of university students who were trying to break through barricades near the town of Kandy in the tea-growing region. Near Colombo, students demonstrated and dispersed without incident, while armed soldiers and police stopped opposition lawmakers from marching to the iconic Independence Square.

“This is unconstitutional,” opposition leader Sajith Premadasa told the troops who blocked their path. “You are violating the law. Please think of the people who are suffering. Why are you protecting a government like this?”

For several months, Sri Lankans have endured long lines to buy fuel, food and medicines, most of which come from abroad and is paid for in hard currency. The first to disappear from shops was milk powder and cooking gas, followed by a fuel shortage disrupting transport and causing rolling power cuts lasting several hours a day at the end of February.

The extent of the crisis became clear when Sri Lanka couldn’t pay for imports of basic supplies because of its huge debts and dwindling foreign reserves. The country’s usable foreign reserves are said to be less that $400 million, according to experts, and it has nearly $7 billion in foreign debt obligations for this year alone.

Rajapaksa last month said his government was in talks with the International Monetary Fund and turned to China and India for loans while he appealed to people to limit the use of fuel and electricity and “extend their support to the country.”

As protests grew against the government’s mismanagement of the economy and calls for him to step down, Rajapaksa doubled down and at midnight Friday assumed emergency powers by decree. The government also declared a countrywide curfew until Monday morning.

It did little to quell the anger of thousands, many first-time protesters, who felt fed up and exhausted by the crisis.

“In this country, it is so difficult,” said Inoma Fazil, a fashion designer who brought her 18-month-old daughter to a protest in Rajagiriya, a Colombo suburb. “We don’t want to leave the country and go, and we want to give our child a good future, but everyone is stealing our money. So we came here for her and the rest of the children.”

A couple joined the same rally straight from the hospital with their newborn, and were greeted with cheers by the protesters who sang Sri Lanka’s national anthem, waved flags and placards.

The concentration of power in the hands of the Rajapaksa family — which also controls the post of prime minister and three other Cabinet seats — drew the ire of protesters. But anger was also directed at politicians in general and a decades-long system that many feels have betrayed them.

At the Colombo rally, protesters turned back an opposition lawmaker, calling out “no politicians!”

Successive governments have failed to diversify exports, instead of relying on traditional cash sources like tea, garments and tourism. The COVID-19 pandemic dealt a heavy blow with an estimated loss of $14 billion in the last two years. Protesters also point to the fact that the immense foreign debt was partly caused by the government borrowing heavily on projects that don’t earn money.

“The main purpose of the curfew is to quell dissent against the government,” said Christopher Stephen, a construction businessman who held placards in the main road near his home.

Stephen said he and his circle of friends and acquaintances had protested every day since early March, and he was excited that more people were joining in.

“What the Rajapaksas have been doing all these years was to divide the people along ethnic and religious lines. But this has united all Sri Lankans — Sinhalese, Tamils, Muslims, Burghers — all want them out,” Stephen said, referring to the president and his powerful family.

Aman Ashraff, an advertising professional who was protesting in his neighbourhood, said Sri Lanka has squandered the opportunity to optimize its potential after ending a decades-long civil war in 2009 because of misgovernance.

“This is the turn for the people to rise up and show that they are not going to tolerate the sort of corruption, the sort of greed and the sort of self-centred governance any further,” he said.

The emergency declaration by Rajapaksa gives him wide powers to preserve public order, suppress mutiny, riot or civil disturbances or for the maintenance of essential supplies. Under the decree, the president can authorize detentions, seizure of property and search of premises. He can also change or suspend any law except the constitution.

The European Union urged Sri Lanka’s government to safeguard the “democratic rights of all concerns, including the right to free assembly and dissent, which has to be peaceful.”

“I am watching the situation closely and hope the coming days bring restraint from all sides, as well as much needed economic stability and relief for those suffering,” she said in a tweet on Saturday.